Rams without Ward for two games 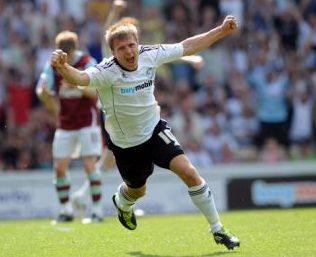 Jamie Ward  was sent from the field during yesterdays defeat by Burnley and will now have to sit out the next two vital games for the Rams.

Ward brought down former Rams player Tyrone Mears, yesterday's pantomime villain, who was roundly booed every time he touched the ball. The offence happened in the penalty area in the second half and Ward was deemed to have been the last man, although it appeared he was not in a goal scoring opportunity, but referee Mick Russell though he was and that has earned the diminutive midfielder a two match suspension.

The two match ban was because of the straight red and because Ward had been sent off earlier in the season when playing for Sheffield United against Leeds.

Ward will now miss the Bank Holiday Monday visit to Carrow road, when the Rams take on Norwich and next Saturdays final home game aginst Bristol City, he will however be eligable to start in the final match of the Championship season away to Reading...