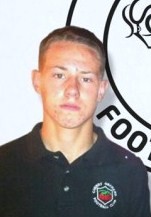 The Rams are set to sign another Republic of Ireland defender in the form of 15 year-old Jack Tuite.

Jack will sign for the Rams when he turns 16 in January 2013 and will follow a long line of talented defenders from the Emerald Isle. Derby County have in the past signed David Langan and more recently Mark O'Brien from the quaintly named Cherry Orchard Club. Conor Sammon is also a product of this club and all the signs are that Jack will be just as succesful as these former and present Rams stars...