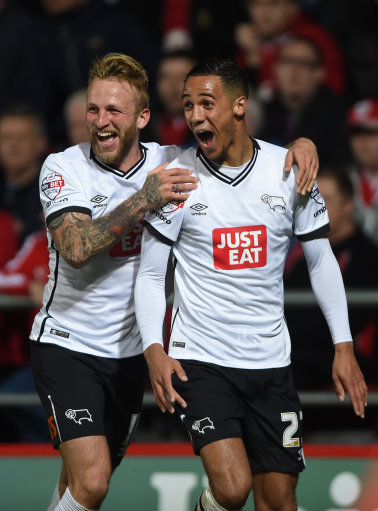 In an exciting and nail biting game last night Derby County came from behind to secure a play-off place in the Championship.

The Rams had taken the lead against Bristol City with a well taken header by Johnny Russell in the 37th minute, but within sixty seconds Bristol had equalised through Jonathan Kodjia.

Bobby Reid put the home side in front as half time approched (44th min). The half time team talk must have been good from Darren Wassell as Derby were level just seven minutes after the re-start with a Craig Bryson strike.

Derby took all three points with a left footed effort from Tom Ince, his 12th goal of the season.

The win, Derby's fourth in a row sees them in 5th place in the Championship. Cardiff City's 2-1 defeat at the hands of Brentford means the Rams are now safe in the Play-off places with 76 points.