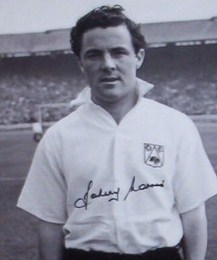 It is with regret we have to inform all Rams fans that Rams legend Johnny Morris passed away yesterday 6th April 2011. Morris was born on 27th September 1923

Morris played inside-right for the Rams and started his league career at Manchester United in August 1939, playing 83 times for the Red Devils, scoring 32 goals.

Derby County had to pay a British transfer record to bring Morris to the Baseball Ground, spending £24,500.

He scored 13 goals in his first 13 games for the Rams, this earning him the first of his three England appearances.

A career with the Rams saw Morris play 130 games and scoring 44 goals, a very good return for an inside-right.

All at Derby County mad send their condolences to the family and friends of Johnny Morris...