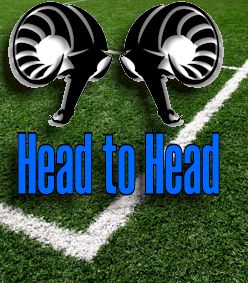 Many of you may have not taken the opportunity to view Derby County mad's extensive Head to Head match statistics we have on the site. It is well worth a view, in it you can view nearly every game played by Derby County since their birth in 1884.

Teams include non league, European, World and even defunked clubs.

So take a moment with us to view The Rams games down the years against Saturday's opponents, Burnley.

You will notice in the list below that the first confrontation between the two teams was back in 1889, Saturday 19th January to be exact. Sad to say that first encounter ended in a 1-0 defeat for the Rams. The Ram however didn't need to wait long for revenge. That came in the 1-0 home win on the 2nd March 1889.

The Rams have a pretty good home record over Burnley with 28 wins to Burnley's 9, with 9 games drawn. The overall picture is closer with the Rams just heading it by the virtue of 42 wins to Burnley's 33 and 19 draws.

This seasons game at Pride Park I dare say will be close as the Rams look to continue a good run of form which has seen them beat Leeds United and draw with league leaders Queens Park Rangers.

The Rams full record against the Clarets is as follows:

Don't forget you can get the full Head to Head story of the Rams against any side they have played just by going to our 'Head to Head' feature in the 'Matchday' drop down menu on the main Derby County mad website. or by clicking here .......