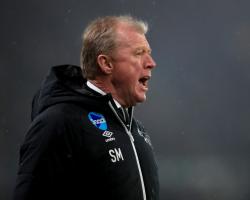 Rams boss McClaren and Leicester counterpart Claudio Ranieri made 18 changes between them, rendering the fourth-round tie an unwanted distraction by prioritising their respective league matches this weekend.

With the Premier League champions facing a crucial clash away at relegation rivals Swansea on Sunday and Derby targeting a Championship play-off spot, extra time was not what either club wanted either.

Andy King headed the hosts in front at the start of the second half but Abdoul Camara's deflected free-kick brought Derby level just after the hour.

"We've got a lot of games in the Championship, our main focus is a play-off place," said Derby manager McClaren, who made eight changes ahead of Saturday's home game against Bristol City

"We didn't need this replay

I don't think Leicester needed this replay, and I think maybe the FA have to look at this competition and say, 'Let's just have one tie', because nobody wanted this replay

You could see that

It was a great game, imagine that going to extra time or penalties, it would have been a classic FA Cup tie

Instead 10 days later and it's two completely different teams

"Leicester have got priorities and we've got priorities, and there was no way we could not make eight changes with the schedule that we've got coming up, so I think that's disappointing and something that should be looked at.

"Some managers did it (made changes) in their first game

We took it seriously, as Leicester did

It was two strong teams, it was a great game of football and a great advert for the FA Cup

Yes the players can play but they can't play at the level that is required for the priorities, which is obviously the Premier League for Leicester and the Championship play-offs for us

"So we've had to sacrifice

Saying that it was still a thrilling cup tie, although I think it is something the FA should look at."

While the victory provided Leicester with some welcome respite and might be important for their confidence after a miserable run of results in the league, Ranieri readily admitted he would swap the cup win for Premier League points

"I say many times I would change for points but it is not possible," said Ranieri, who on the eve of the game was given the vote of confidence by owner and chairman Vichai Srivaddhanaprabha - in attendance on Wednesday night

''But it is important to get through and important for confidence

I hope this match can help us improve our Premier League season.''

In his statement backing Ranieri, Srivaddhanaprabha offered his manager his ''unwavering support'' and Ranieri revealed the Thai businessman came to see him and his players before the game.

''It is important because when he comes he is positive every time,'' said Ranieri

''He brings a positive strength with him, it is important for everybody.

''I speak with the owner but this is normal

He did not come to see me but to see the squad."