Daniel Pinillos thumped home an injury-time equaliser to ensure the spoils were shared as Mark Warburton and Gary Rowett marked their first games in charge with a 2-2 draw between Nottingham Forest and Derby.

On a dramatic afternoon at the City Ground, Rowett's Rams looked to be on course for three points after two goals in the space of six second half minutes- from Matej Vydra and David Nugent - had seen them fight back from behind. 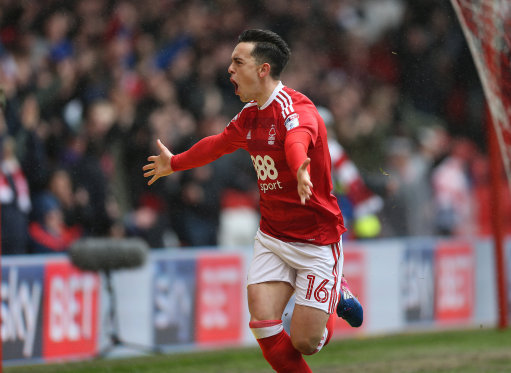 Zach Clough had put Forest ahead after only four minutes

But it required a 95th minute header from Pinillos to ensure Warburton was not beaten on his Forest debut as boss.

The home side had dominated the first half, but it was the visitors who were in charge for much of the second period

With relegation rivals Blackburn drawing 2-2 with Preston in another early Saturday game, it felt like a point that was more valuable to Forest than their visitors.

When David Vaughan swept a ball out to the left for Pinillos, the Spanish full-back then conjured up an even better delivery of his own, picking out an unmarked Clough in the box

In the complete absence of any Derby defenders, Scott Carson rushed off his line to clear, but Clough beat the keeper to it, to prod a simple finish into the net from eight yards.

The goal seemed to leave Derby stunned, with Ben Osborn almost slotting in Britt Assombalonga for the chance of a second, with Osborn himself shooting over when his attempted pass rebounded back to him.

Tom Ince was close to breaking the offside trap for Derby - but it was largely all Forest in the first 20 minutes with Osborn coming closer with another long-range shot and Ben Brereton seeing his effort blocked on the line at the near post.

Pinillos gave away possession poorly on the edge of his own box, leading to Ince firing a shot narrowly over the bar when the Derby man might have done better.

Derby were finally mustering a response and Jordan Smith had to make a smart save at his near post to deny the increasingly lively Ince as he shot from a tight angle. 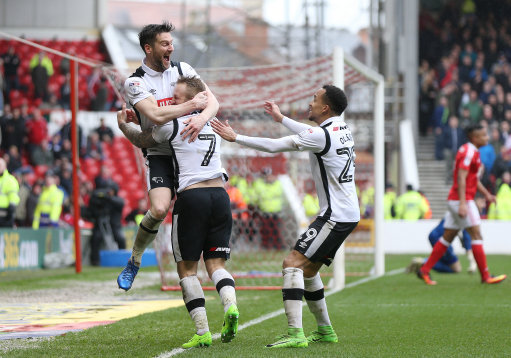 Forest had dominated the first half for long periods - but it was Derby who were quickest out of the blocks in the second, clawing themselves level after only two minutes - and taking the lead in the 53rd minute.

The first goal came as Johnny Russell whipped in a low cross into the danger zone, with Vydra forcing the ball home from close range.

This time it was Forest who were stunned, with the Rams adding a second six minutes later, with Bradley Johnson lifting a clever ball into the box and Nugent applying an equally intelligent finish, flicking a header home off the inside of the post.

Ince sent a free-kick dipping on to the roof of the bar and Johnson forced Smith into a comfortable save as Derby threatened to extend their lead. 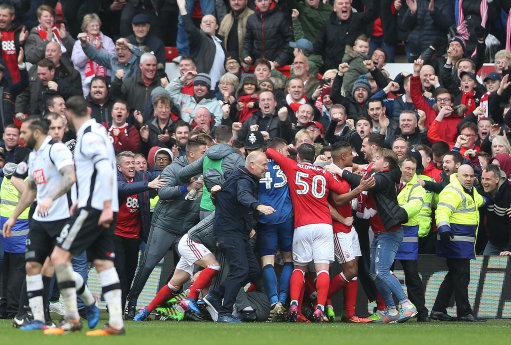 Smith had to make two outstanding saves to keep Forest in the game, firstly as Alex Pearce connected with a powerful header from a corner and again as sub Jacob Butterfield attempted to thread a low shot into the bottom corner.

Forest almost snatched a late equaliser when sub Apostolos Vellios hammered a shot against the upright, after turning brilliantly on the edge of the box.

But the goal was coming as an Osborn corner was met, five minutes into injury time, by a thumping header from Pinillos, sparking jubilant celebrations at the City Ground.