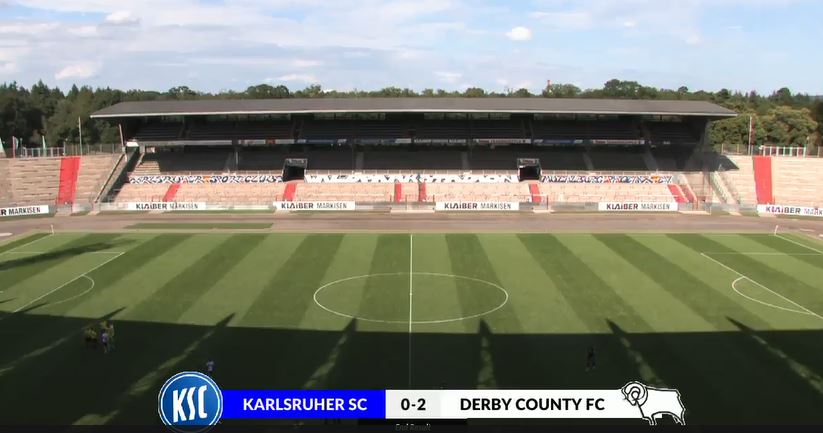 A fairly mundane first half saw the final pre-season friendly for the Rams end 0-0.

Derby never looked in trouble from the German second division outfit and fter the break it only took Derby ten minutes to take the lead. A goalmouth scramble was not cleared by Karlsruher and Austrian midfield attacker Andreas Weimann drilled a fierce shot into the back of the net.

Derby although not in complete control looked to be the better side. To rest players for next week and to give others valuable playing time, four changes were made by each team in the 65th minute. Derby bringing on a formidable array of talent in Johnny Russell, Bradley Johnson, Will Hughes and Chris Martin.

With Derby now firmly in control a  75th minute suicidal decision by the German goalkeeper saw him come out of his area and miss a headed clearance from a long through ball by Will Hughes. Darren Bent benefiting from the faux pas to head the ball into the net and putting the Rams 2-0 up.

Karlsruher were now a beaten side but a good save by Scott Carson low to his right hand side stopped the first real attack by the Germans in the second period.

Derby rounded of a decent pre-season performance with a great move. Johnny Russell taking the ball in midfield, powering forward and slipping an inch perfect all to Chris Martin. He pulled the ball back to an on-rushing Bradley Johnson, but he couldn't keep the shot down and it sailed over the bar.

Derby look in good shape for the coming season and hope to get away to a flying start with a win over Brighton next week.