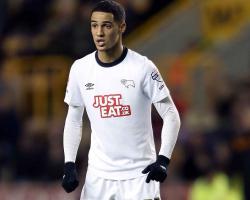 The 23-year-old winger, who had a spell on loan with the Rams last season, has agreed a four-year contract after the clubs agreed an undisclosed fee.

County head coach Paul Clement told the club website: "I'm delighted that we have been able to sign Tom on a permanent basis

"I'm aware of the positive impact he had on the side during his time on loan last season from speaking to people at the club, and also watching a number of the matches back myself.

"He is an exciting talent, there's no doubt about it, and he's another very positive addition to the squad."