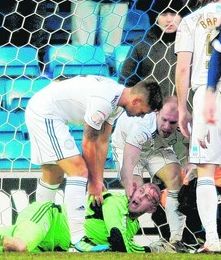 Rams goalkeeper Frank fielding used his head, quite literally on Saturday and came out of the clash requiring four stiches in a head wound.

The incident came at the end of the game at the New Den and players were concerned at the amount of blood Frank spilt for the Rams. However the small cut on the side of Fieldings head was stitched up after the game with four stitches.

Nigel Clough was relieved that his number one would not have to miss tomorrow nights clash with Reading at Pride Park.

Derby County drew the game against Millwall 0-0, and another good point on the road for the Rams...