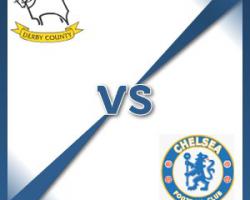 Derby V Chelsea - view commentary, squad, and statistics of the game live.McClaren finds no flaws in BluesSteve McClaren admits Derby's assessment of Chelsea's weaknesses took "five seconds" and knows the Rams are massive underdogs in Tuesday's quarter-final of the Capital One Cup.County, third in the Sky Bet Championship, host the Barclays Premier League leaders at the iPro Stadium - a rematch of the FA Cup third round tie last season, which Chelsea won 2-0.Hull boss Steve Bruce insisted Jose Mourinho's side have no flaws before their 2-0 defeat on Saturday and McClaren has also failed to find any."At the moment they are the strongest

I can't see a weakness, we tried to find one and it lasted about five seconds," he said."We have to be at our very best, very, very best to come even close

We want to do that and we are capable of doing that."They are the best team in the Premier League and in Europe

They have only lost one game and only lost it because they ran out of time (against Newcastle)."We have to perform at our best to stay in the game and have a chance of achieving our dream result

I want to see how our players perform - have we moved on from a year ago? Because Chelsea have."But they will have to be at their best

Mourinho will respect us and appreciate that

That will reflect in the team he picks

We don't expect any favours."Gary Cahill has been taken out of the line of fire by Jose Mourinho, who will rest the defender who was accused of diving.Hull boss Steve Bruce accused Cahill of simulation - "like something out of Swan Lake", the Tigers boss said - following Chelsea's 2-0 win at Stamford Bridge on Saturday

Bruce felt Cahill should have been shown a second yellow card.The England centre-back will be replaced by Kurt Zouma for the trip to Derby, even though Blues manager Mourinho has vowed to field "the best possible team"."We're going to play against a top team in the Championship," Mourinho told Chelsea TV."The difference between a top team in the Championship and the teams of the Premier League are very, very small

We played there last year and it was not an easy game."We have no reason to rest people

The only one that is not going because he played against Sporting (Lisbon) - I never gave him a break - is Cahill."Cahill doesn't play, I play Zouma."It is a decision which may have been taken ahead of the diving storm when Chelsea had Diego Costa and Willian booked for simulation.Cahill is due a rest as he was not one of the six players switched out of the side for last week's Champions League match with Sporting Lisbon.But the timing is convenient for Mourinho, who last season lambasted Luis Suarez for an "acrobatic swimming pool jump" as he railed against simulation in English football.He also insisted "there are no divers at Chelsea" following Oscar's booking for simulation at Southampton on January 1.Prior to the Hull contest, Mourinho insisted none of his players would be ever-presents over the congested Christmas schedule.The Derby match is Chelsea's fourth fixture of December and they now play six games in 19 days until their FA Cup third-round tie with Watford on January 4."I don't think one player is going to play these six matches," Mourinho said

"Every one of them has to go to five, the ones that play more they have to go to five; one (game) rest I think I have to give them."We did that against Sporting, we gave a rest to some players and we're going to do this from now until the end of the month."Mourinho will afford his players rest following the Derby match, with Chelsea's next game the Premier League contest at Stoke next Monday."We have two days off, which is the two days after Derby, which allows the players to go home," Mourinho added."Maybe not, for sure, the South American ones, because it's very far, but the ones around England, Belgium, France, Germany, two days off; they have the chance at least to go and have a nice dinner with their families."It's the only two days I can give them

We play Tuesday against Derby, I give them Wednesday and Thursday, after that they are back Friday to play Monday."