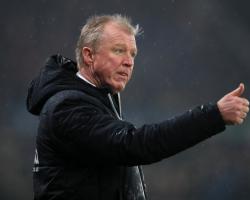 Leicester's owners issued a statement on the eve of Wednesday night's FA Cup fourth round replay pledging their "unwavering support" for manager Claudio Ranieri, who has come under increasing scrutiny following a miserable run of results.

Derby also head into the match on the back of a league loss but McClaren's side are fighting for promotion from the Championship via the play-offs.

"We are the underdogs again," McClaren told reporters at his press conference

"I'm not concentrating on Leicester and their situation

I'm looking for a performance from my team - individually and collectively.

"I watched the Man United game and for the first 40 minutes, Leicester were back to their usual aggressive, pressing selves

The players have the belief and they will need to show confidence and get off to a good start."

"Someone said the other day that after what he did for them last season, there should be a statue of him outside the stadium," he said

"Their achievement should be appreciated - and it has been

"Claudio has said the target this season was 40 points - will he achieve it? Without a shadow of a doubt, in my opinion

He's got the players for that.

"It's a bit of a sideshow, a circus, that's part of the theatre of football

It's not very nice but Claudio is experienced and I'm sure he will be staying calm, stable, and keep the players together."