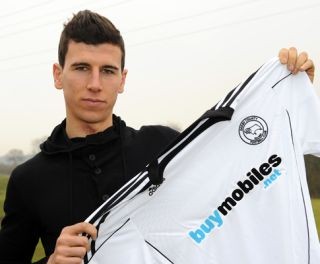 Ayala joined the Rams on loan in February in a deal until the end of the campaign. The 20-year-old has made nine appearances, including eight consecutive starts in a centre-back partnership with Shaun Barker.

Derby plan to ask Liverpool about the possibility of the Spaniard making a return to Pride Park during the 2011-12 season.

"Is there a possibility we could see him back on loan next season? We are going to make that inquiry, certainly," manager Nigel Clough told the Derby Telegraph.

"We will be speaking to Liverpool to see if there is any possibility of that happening. The only thing is that they don't usually make those decisions until August.

"We need some players in before that and we certainly need another centre-half in. Daniel has shown us enough during his time here and we would like to take him as a loan as well next season."