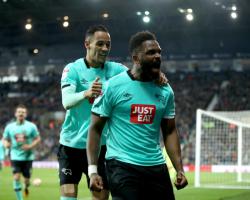 The club has not been in the Premier League since 2008, where they recorded a record low points total of just 11, but as they target promotion this season Bent feels their Hawthorns victory shows promise.

"It's a fantastic result

I thought we played really well in the first half, but we showed that we could compete with a Premier League side," said the striker.

"When you are playing these Premier League sides you have to show them respect and we had to be cautious because they have some quality players.

"We were disappointed to go in a goal down

In the second half, we didn't have anything to lose and we went out to have a right go

When you look at the chances that we created compared to them, I think we deserved it."

"It's always nice to get goals," Bent told the club's official site

"People that have watched me over the years associate me with tap ins and I'll take any kind of goal, but the FA Cup is a special competition and for us to advance into the next round by beating a Premier League side, it doesn't get much better than that."

"I didn't see it coming, the two goals were disappointing