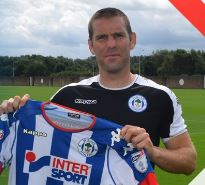 The seven year stay with Derby County is over for crowd favourite Jake Buxton. The 31 year-old signed for Wigan Athletic this morning for an undisclosed fee.

Buxton didn't feature much in the Rams 2015-16 season and finding it increasingly difficult to claim first team football has now moved to newly promoted Wigan on a three year contract.

Bucko played 136 times for Derby County and scored 11 goals, always playing with his heart on his sleeve and given full commitment

He will be missed at the club and all at Derby County Mad wish him every success at Wigan.