Brighton march on and draw level with Newcastle

The Seagulls' eighth home league win out of 10 stretched the gap between them and third-placed Huddersfield to nine points, although the Terriers have two games in hand.

Derby went into the clash desperate for a win to reignite their faltering play-off push, but rarely threatened and have now won only one of their last nine league games. 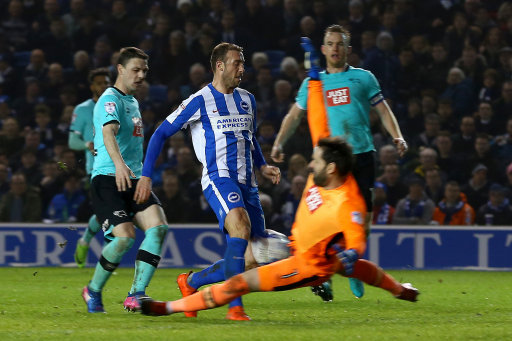 Brighton, who have missed out on automatic promotion once and the play-offs three times in the last four seasons, now boast 19 league clean sheets.

With Newcastle hosting Fulham on Saturday and Huddersfield playing at Brentford, the Seagulls made the perfect start when Knockaert drove them ahead after only five minutes with his 13th goal of the season from the edge of the area.

Skipper Bruno set up the Frenchman and Knockaert got the better of the recalled Julien de Sart before firing home left-footed into the far corner.

Derby keeper Carson required treatment after a collision with team mate Jacob Butterfield before Brighton striker Murray, recalled as the Seagulls only change in place of Tomer Hemed, headed a Skalak corner wide at the near post.

Striker Baldock should have hit the target for Brighton when firing wide from Knockaert's pass at the end of neat build-up of first-time passing.

Baldock was off target again mid-way through the half at the near post after more good work by Knockaert.

The hosts deservedly increased their advantage two minutes before the interval through Baldock, who latched onto a pass from Murray to sidefoot low into the net from eight yards.

Derby boss Steve McClaren attempted to freshen up his side by introducing Will Hughes and Craig Bryson for the second half in place of De Sart and David Nugent.

But Brighton continued to pose the problems and Knockaert was denied a second goal when his fierce long range effort was tipped over by the alert Carson.

Derby, with only one goal in their previous six away games, finally produced a threat when, from a cross by Cyrus Christie, Matej Vydra directed a header onto the bar.

The visitors were indebted to an important block by Chris Baird after Murray got a shot away when neatly chesting the ball down.

But Murray was on target to seal Albion's win 12 minutes from time with his 18th goal of the season, firing in from seven yards after Knockaert delivered a low cross.