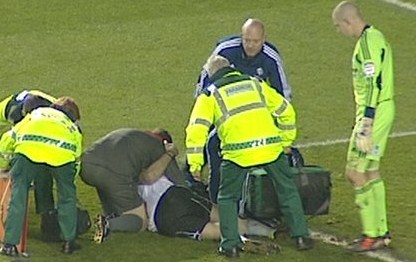 Rams central defender Shaun Barker could be out of football until Christmas after scans on his injured knee revealed Cruciate and medial ligament damage as well as a dislocated knee cap. With recovery taking up to nine months Barker is unlikely to play again for the Rams in 2012.

Barker was a late starter this season after having surgery on his knee in the summer of 2011 and the latest injury has come at a time when he has just started to forge a decent partnership with Jason Shackell in the Rams central defence.

The injury appeared to happen as Barker and Rams goalkeeper Frank Fielding went for the same ball during the incident packed clash with Nottingham Forest at Pride Park on Tuesday night. Taunts from Forest fans behind the goal as Barker lay in agony was said to have started chants from Ram fans concerning former Forest Chairman Nigel Doughty, for which Derby County officially apologised to his family.

Nottingham Forest are not thought to be investigating their fans who abused The prone Shaun Barker with chants of “let him die” as he lay in agony at the same time as the Doherty chanting incident...