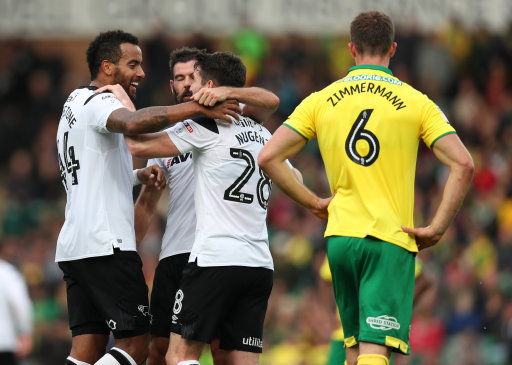 Derby County have ended Norwich City's eight match unbeaten run and put themselves just out of the play-off places with a 1-2 win at Carrow Road.

Norwich started the game well and hit the underside of the Rams bar in the 17th minute.

The midfield battle was intense but neither side could claim to have the upper hand. Derby had some neat and accurate passing but failed to make any clearcut openings.

Norwich thought they had a good claim for a penalty in the 38th minute as Josh Murphy had the ball on the byline, rounded Carson and fell to the ground as Carson tried to reclaim the ball. The referee giving only a corner, much to the dismay of the Canaries crowd.

With half time approaching the Rams made the breakthrough with an inch perfect through ball to David Nugent being expertly placed in the top left hand corner of the Norwich net.

Derby switched Matel Vydra at the interval bringing on Chris Martin in support of Nugent. Tom Huddlestone was looking for a second goal in the 54th minutes as a stunning 25yard volley was just tipped over by Angus Gunn.

Derby never really looked safe for all three points and in the 70th minute a headed goal from Marco Stiepermann gave the home side hope of making it nine games unbeaten. 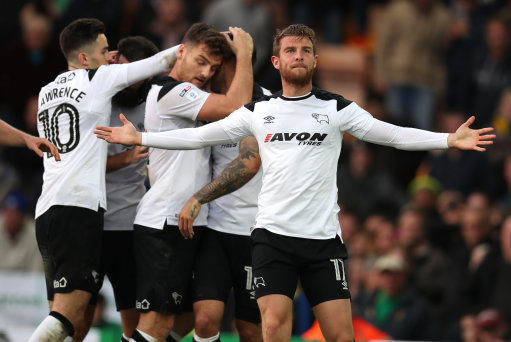 Derby to their credit were not settling for the draw and had sustained pressure in the closing 15 minutes of the game. With just seven minutes of normal time left it was former Norwich star, Bradly Johnson who undid the Canaries. His fierce shot could only be parried by Gunn in the Norwich goal and Sam Winnall was on had to put the rebound in the net.

The Rams now move on to six games unbeaten but face a stiff task on Tuesday as they travel to Leeds United but with Derby sitting just outside the play off places and with a game in hand of most teams around them.