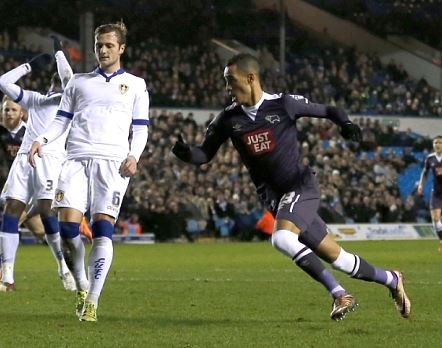 Sky sports were nearly not let into the ground to cover this game after Leeds boss Massimo Cellino refused them entry in an attempt to highlight how he saw it effecting attendances at Elland Road.

Cellino gave in to pressure however and allowed the game to be televised, which then didn't fail to excite.

Derby set the pace and after just 13 minutes scored with a superb dribble and shot from midfielder Jeff Hendrick, he danced past several Leeds defenders and placed the ball to the keepers right.

Leeds have been Derby's nemesis in recent games and Derby thought it was happening again  in the 71st minute when Chris Woods met a perfect cross with his head giving Lee Grant no chance of stopping the bullet header.

The Rams made changes putting on Chris Martin and Tom Ince, replacing Darren Bent and Andreas Weimann and found the skill to claw their way back into the game, with Ince grabbing the equaliser in the 79th minute.

The Rams continued to look for a winner, which would have put them top of the table at the end of the year but despite several more half chances a draw was the best both sides could achieve, a possibly the right result in the end of a pulsating game.