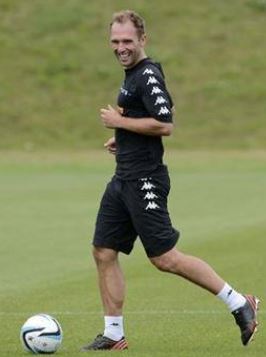 Harry Redknapp knew he and his team were in for a hard fought game and that is the way it turned out. QPR dishing out some very physical challenges and the Rams withstanding and handing out some of their own.

The goal when it came was from an unexpected quarter, veteran holding midfielder John Eustace heading the ball into the top corner of the net following a flap and poor punch out by Green in the QPR goal. Although the header flew straight into the net there was controversy with QPR claiming a foul by striker Chris Martin on the line, but the referee didn’t see anything wrong and the goal stood.

This was a real team effort by the Rams and had keeper Lee Grant with a wonderful stop down to his right, stopping a certain goal from a headed cross for the R’s.

Joey Barton was again controversial and a constant moaner to the referee and was lucky to stay on the field after the referee seemingly failed to see a blatant elbow on Chris Martin.

The Rams had to defend well during the second half and it seemed the Rams needed a second to secure all three points but stalwart defending by ‘man of the match’ Richard Keogh , Jack Buxton and the rest of the defence saw Derby County home.

Derby now find themselves just a point behind QPR and Burnley in third and second place, but have played a game more than both clubs above them. Forest are now four points behind Derby in 5th place in the league, they also having a game in hand on the Rams.

There is now a sense of coming of age for this squad, after beating QPR, the first team that Derby County have beaten in the top six clubs this season and with luck now realise automatic promotion to the Premiership is now more than a dream with 16 games to go of a very promising season for the Rams.