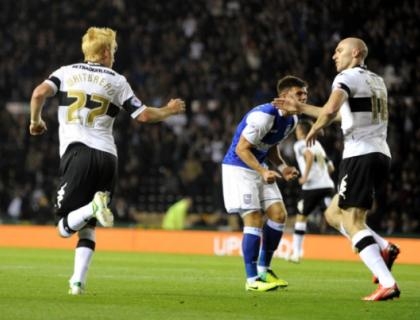 Chris Martin's first ever Football League hat-trick helped Derby cruise to a 5-1 victory in the first game at the renamed iPro Stadium.


Isaiah Osbourne headed Blackpool in front early on but that was as good as it got for Paul Ince's side, whose indiscipline continued as they finished the game with nine men.


The Seasiders' goal led a charmed life for the remainder of the first half.


Their luck ran out after half-time, though, as Derby hit three quickfire goals to turn the game on its head.


A Martin double, the first a penalty, and another effort from Craig Bryson put the Rams in control by the 57th-minute mark.


Former Norwich striker Martin, in his first full season with Derby following a loan spell during the last campaign, took his tally for this season to 13 goals as he completed his treble with another spot-kick - an incident which saw Neal Bishop sent off.


Substitute Angel Martinez then also saw red for the visitors before captain Richard Keogh completed the rout in injury time.


A sustained spell of Derby pressure, which lasted for almost the remainder of the first-half, followed.


Only a superb piece of defending inside the six-yard box from Jack Robinson, beating Martin to Bryson's low cross, prevented the Rams' leading scorer from netting an equalising goal after 17 minutes.


Bishop then twice saved the Seasiders with last-ditch blocks either side of the half-hour mark. First he slide in to deny Simon Dawkins as Steve McClaren's men caught them on the break, before Martin's close-range shot struck the 32-year-old following some excellent play by Dawkins.


Another chance went begging for Derby after 34 minutes.


Dawkins was involved again but his cutback was fractionally behind Bryson and the midfielder lifted his effort over the crossbar from just four yards out.


McClaren made a change at half-time with Johnny Russell replacing Jamie Ward, who has recently been carrying a knee injury.


Derby's first-half pressure was finally rewarded when they deservedly equalised shortly after the restart.


Martin went to ground under a challenge from Robinson down the right-side of the box and the Rams striker picked himself up to convert the resulting penalty after 47 minutes.


Six minutes later Dawkins capitalised on a defensive error by Chris Basham. His shot was saved by Matt Gilks but Martin was on hand to steer home the rebound.


Dawkins' 18-yard effort whizzed just wide as gaps began to appear in the Blackpool defence before Bryson made it 3-1, flicking in from close range after good work by Andre Wisdom.


At the other end, Lee Grant got a rare feel of the ball as he had to push away a free-kick from former Derby forward Steven Davies.


What little hope the visitors appeared to have of getting back into the game was extinguished midway through the second half when Bishop was shown a straight red card for bringing down Dawkins inside the area.


It presented Martin with the chance to complete his hat-trick - he duly obligued.


Craig Forsyth almost made it five but his shot went just wide.


It got even worse for Blackpool when Martinez followed Bishop down the tunnel in the 88th minute for a second bookable offence.


It was the Seasiders' fifth red card in a little over 90 minutes of football following their lack of discipline in midweek at Yeovil, where Kirk Broadfoot, Ricardo Fuller and Gary MacKenzie were all sent off in the final five minutes.


It was also a eighth dismissal of the season for Paul Ince's team.