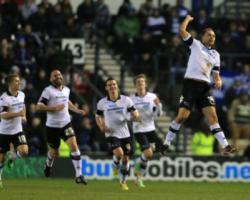 Bryson hat-trick for rampant RamsNottingham Forest's play-off ambitions were dealt a massive blow when they were humiliated 5-0 at Derby, who romped to their biggest win over their East Midlands rivals in 116 years.

The Rams had failed to score in four games but Craig Bryson gave them an early lead and struck again in the 31st minute before Jeff Hendrick gave former Forest manager Steve McClaren's team into a 3-0 half-time lead in this Sky Bet Championship contest.

It got even worse for Forest as Johnny Russell smashed in a shot from outside the box and Bryson completed his second hat-trick of the season from the penalty spot after ex-Forest striker Patrick Bamford was tripped by goalkeeper Karl Darlow.

Derby had not scored in six hours but the drought ended in the sixth minute when Jamie Ward's low cross from the left caused panic in the Forest defence and Bryson won his challenge with Moussi to beat Darlow from 10 yards.

Former Derby manager Bill Davies was taunted by the home fans but Jamie Paterson almost got through for Forest on the left before a counter-attack for the home side ended with Craig Forsyth firing high over the bar.Forest had to wait 30 minutes for their first shot on target when Radoslaw Majewski's low drive was easily saved by Lee Grant but Derby found the net again twice in the space of six minutes to leave their arch-rivals in tatters.

To rub salt into Forest's gaping wounds, Bamford was involved in both goals, cleverly slipping the ball inside to Chris Martin, who played Bryson in to go past Moussi too easily and fire low past Darlow in the 31st minute.Forest were horribly exposed in the 37th minute when Derby broke from a corner, Gonzalo Jara slipped and Bamford showed composure before playing Hendrick in on the left to all but finish the game as a contest.

It had been a nightmare opening 45 minutes for Forest, who replaced Moussi with Darius Henderson at half-time - and Derby ended any lingering doubts about the outcome with a fourth goal in the 54th minute.Russell, who replaced Ward shortly before the interval, made space for himself 20 yards out and sent a swerving left-foot shot inside Darlow's left upright.

The sunshine was replaced by rain clouds and the day got even blacker for Forest in the 69th minute when Bamford was brought down as he tried to go round Darlow, who minutes before had saved well from Russell and Martin.Derby had missed three previous penalties but there was no mistake this time as Bryson sent Darlow the wrong way to give his team's promotion hopes a big lift and leave Forest without a win in seven Championship games