Nugent also had a penalty saved but it was a bad night for goalkeeper David Button, who was at fault for two of the goals as Fulham collapsed despite dominating possession in the first half. 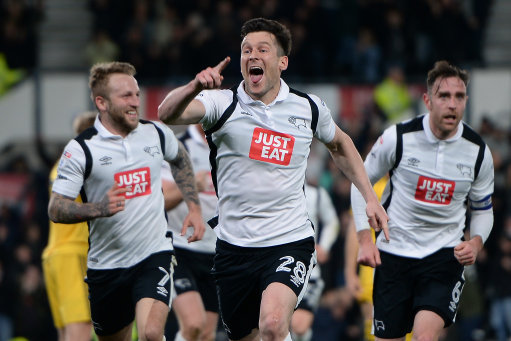 Derby were unchanged for the third consecutive game while Fulham made three changes and although the visitors started confidently, they were caught cold in the eighth minute.

Marcus Olsson played a ball from inside his own half over the top and Nugent got in as two defenders hesitated to lob over Button from 15 yards.

Fulham responded with a slick move that ended with Tom Cairney shooting at Scott Carson from the edge of the box before the Derby keeper pushed a Scott Malone cross away from Sone Aluko in the 17th minute.

The visitors were getting plenty of the ball without finding a telling pass, although Derby nearly gifted them an opening in the 29th minute

Defensive uncertainty let in Floyd Ayite but he could not find a yellow shirt.

But Fulham were level in the 35th minute when Ryan Fredericks whipped in a cross that came off a Derby defender and Ayite beat Carson with a low shot from 16 yards.

The game was wide open and Derby won a penalty in the 41st minute when Kevin McDonald tripped Matej Vydra and Nugent's penalty was superbly saved by Button, only for Derby to score from the corner when the ball was headed on twice and Nugent made amends with an overhead kick from eight yards.

Fulham almost equalised before the break when Aluko smashed a shot against the bar.

Derby made a change, bringing on midfielder Jacob Butterfield for Vydra, and they almost caught Fulham again with a ball over the top when Nugent appeared to be pulled back by Tim Ream.

But Fulham had lived dangerously at times and they paid the price in the 59th minute when a loose pass let Nugent in and Button's clearance cannoned off the striker, who held off a defender to run the ball into an empty net.

Another dreadful mistake sealed Fulham's fate in the 67th minute when Button's casual throw was picked up by Craig Bryson, who played in Russell to fire low into the bottom left corner.

Button denied Derby a fifth with a sharp save from Russell before Fulham broke away in the 79th minute through Aluko, who played in Ayite for his second - but the damage had already been done.