Derby staged a remarkable second half comeback to draw 3-3 after Bristol City let slip a three goal lead in a pulsating game at Pride Park.

Matty Taylor celebrated his first goal for City before Tammy Abraham scored twice to give City a 3-0 half-time lead.

But the second half was all Derby. 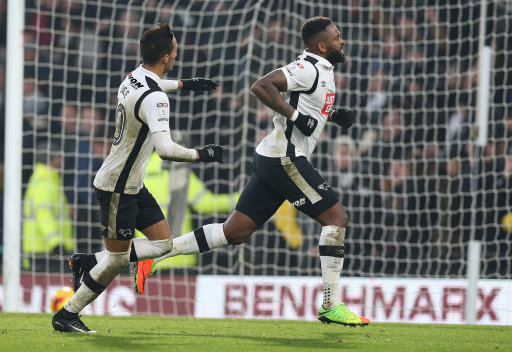 Darren Bent started the fightback and after Taylor missed an open goal, Tom Ince headed a second before Bent equalised from the spot to deny City a first away league win since September.

The day started cold and cheerless at Pride Park but a memorable one for Derby skipper Richard Keogh who was making his 500th appearance in all competitions while Taylor made his first start for City.

The odds were against the visitors who had lost seven of their last eight games at Derby and it needed a good save from Fabian Giefer to keep out an Ince shot in the eighth minute.

But City went ahead in the 14th minute when Aden Flint's downward header from a corner hit Will Hughes on the line and Taylor put the rebound into the roof of the net.

Derby almost levelled two minutes later with Hughes and Ince combining on the right before Bent's flick set up Abdoul Camara at the back post but Giefer made another vital block.

City were passing the ball confidently and they created a great chance in the 25th minute when Abraham played a one-two with Josh Brownhill who was through but could not beat Scott Carson.

It was a warning Derby failed to heed and two minutes later another slick move put Taylor in on the left and his low cross was swept in by Abraham.

Derby responded with a double substitution but City stunned Pride Park with a third in the 38th minute when Joe Bryan's low cross from the left was knocked back by Taylor and Abraham again drove the ball past Carson.

To have any chance, Derby had to strike early in the second half and they delivered in the 57th minute when Chris Baird crossed from the right and Bent scored with a diving header from six yards.

But City missed a sitter two minutes later when Bryan ran into the box and picked out Taylor who put the ball over the bar from almost on the goal line.

It was an astonishing miss and it proved costly when Derby scored in the 76th minute with Ince heading in Ikechi Anya's cross before they equalised five minutes later.

Ince was caught as he turned inside the area by Scott Golbourne and although Giefer got his hands to Bent's penalty, he could not keep it out

The cold and cheerless Pride Park had certainly warmed up after a fantastic second half performance from the home team.