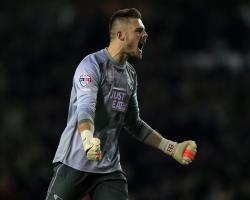 Derby 3-0 Brighton: Match Report - view commentary, squad, and statistics of the game as it happened.Martin at the doubleDerby breezed past Brighton with a 3-0 victory at the iPro Stadium to maintain their position at the top of the Sky Bet Championship.The Rams had Brighton's number last season, beating the south coast side on all four occasions - including both legs of the play-off semi-final - and Steve McClaren's men maintained their dominance over the Seagulls on Saturday afternoon.Three goals in a devastating 10-minute spell had the game won before the halfway point of the first half.A Chris Martin double was separated by a strike from Johnny Russell and, with only 20 minutes on the clock, Brighton were in danger of being thrashed

However, the visitors made it to half-time without any more breaches of their defence.Derby continued to create openings in the second half and the only surprise was that they did not add to their three first-half efforts, as the Seagulls avoided further damage without ever looking like reducing the deficit.The Rams began brightly and David Stockdale got down to his right to smother a 20-yard shot from Martin inside the opening minute.Brighton were unable to retain possession well enough to get up the pitch and were penned inside their half for the majority of the first 10 minutes

So it was no surprise to see them fall behind.Derby's early impetus was rewarded when Jeff Hendrick's pass across the face of the penalty area was picked up by Martin, who cut back inside on to his left foot and beat Stockdale with a low shot from 15 yards out.Five minutes later, a beautifully-weighted through-ball from Craig Forsyth put Russell one-on-one with Stockdale and he calmly dinked the ball over the advancing goalkeeper.Brighton did have the ball in the net after 18 minutes, but Darren Bent's header from Jake Forster-Caskey's long cross was ruled out for offside.The Seagulls' brief moment of hope was fully extinguished when Martin headed home his second goal of the game, and his 14th of the season, at the far post from Cyrus Christie's right-wing cross.Brighton boss Sami Hyypia immediately brought on Rohan Ince in a damage-limitation substitution

Joao Teixeria was the man to make way.The switch seemed to work, with the visitors under less pressure for the remainder of the first half, although how much of that was due to Derby taking their foot off the gas was open to debate

In possession, Hyypia's team remained just as toothless going forward.Elliott Bennett's wayward long-range effort in the final minute of the first half was all Brighton could muster.Derby's intensity returned after the break and Simon Dawkins went close before a handling mistake by Stockdale almost gifted the Rams a fourth goal.Craig Bryson's shot from the right-hand side of the area slipped through the goalkeeper's grasp and the ball tricked on to the far post before it was cleared away by the covering Aaron Hughes.The chances continued to come for the hosts

Martin, chasing his hat-trick, then sent a low shot straight into the midriff of Stockdale as the midway point of the second half approached.Martin worked Stockdale again with two minutes remaining, the keeper pushing away the Scotland international's curling effort from inside the box.In the end it was routine stuff for McClaren's men, who remain one point clear at the top of the table