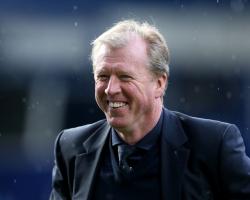 Derby 2-0 Reading: Match Report - view commentary, squad, and statistics of the game as it happened.Russell ends Derby waitJohnny Russell fired Derby through to round four of the Capital One Cup for the first time since their semi-final appearance six seasons ago.The Rams edged past Reading 2-0 at the iPro Stadium, with Russell breaking the deadlock in the 67th minute and an own goal from Alex Pearce after 82 minutes ending any doubt about the outcome.Steve McClaren's home side dominated and, despite making six changes to the team that drew with Cardiff on Saturday, looked fluid and attacked with a good tempo, on-loan Liverpool winger Jordan Ibe catching the eye on his first start for the club.For a long spell, however, Derby did not work Mikkel Andersen in the visiting goal enough, and it looked like it might be a frustrating night for the Rams as chance after chance went begging.Reading occasionally offered a reminder that they were still a threat on the break and young Kelle Roos, making his debut in the Derby goal, made a superb save to deny Jamie Mackie, on loan from Nottingham Forest, as half-time approached.Ibe was denied the goal his performance deserved when Andersen tipped his shot onto the crossbar but shortly afterwards Russell made the breakthrough, before a Alex Pearce own goal with eight minutes remaining sealed victory for McClaren's side.While Derby made half a dozen changes, with teenager Will Hughes reaching the milestone of 100 appearances for the club, Reading went even further by making seven alterations

Danny Guthrie, Pavel Pogrebnyak and Mackie were among those recalled to the startling line-up, as was Aaron Kuhl - the 18-year-old son of former Rams midfielder Martin Kuhl.The hosts looked lively early on as Hughes and Craig Bryson went close with efforts from just outside the area.Leon Best, from a little further out, at least tested Andersen who pushed it away

From the resulting corner Best then headed over from eight yards out.An error by Cyrus Christie just after the half-hour mark let in Mackie but Roos denied him with a fine save, low to his left.Andersen saved from Hughes after 38 minutes

At the other end, Roos tipped over a Ryan Edwards effort.Ibe was denied a superb goal six minutes into the second half when Andersen pushed his 20-yard shot on to the bar.Just as Derby must have been beginning to think it would not be their night, substitute Chris Martin flicked the ball into Russell's path and the Scot beat two defenders before firing a low shot past Andersen and into the bottom corner of the net.It was little more than the Rams deserved, but there was more to come.With their tails up, McClaren's men continued to pour forward and the impressive Ibe set up Martin whose cross into the six-yard box struck the unfortunate Pearce on the knee and bounced into the net.The own goal confirmed Derby's place in the fourth round for the first time since the 2008/09 season, when the Rams reached the last four - where they were defeated over two legs by Manchester United