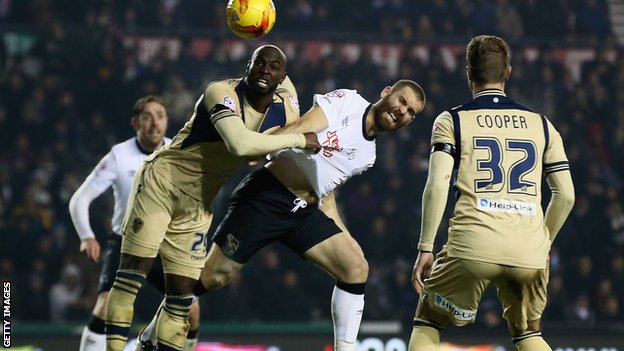 Derby 2-0 Leeds: Match Report - view commentary, squad, and statistics of the game as it happened.Derby defeat lowly Leeds Derby County maintained their stranglehold over Leeds United with a comfortable 2-0 Sky Bet Championship victory at the iPro Stadium that leaves the Yorkshire club just one point above the relegation zone

.A 30,000 plus crowd saw Derby move up to third in the table through a first-half own goal from Alex Mowatt and a Jake Buxton header early in the second on a bitter night in the east midlands.It was another dominant display by Derby who had won seven of their last eight games at home against Leeds so losing captain Stephen Warnock to injury in the opening minutes was a serious setback for the visitors.Warnock appeared to twist a knee challenging Cyrus Christie near the touchline in the third minute and - although he tried to continue - Gaetano Berardi replaced him in the eighth minute.

The gap between the teams in the table was glaringly obvious as Derby swarmed forward, intent on avenging the 2-0 defeat at Elland Road in November, but Leeds had the first opening after 19 minutes when Marco Antenucci got in on the right but fired well wide.Derby had lost some of their early momentum but Christie caused panic in the Leeds defence 10 minutes before the break with a cross that was scrambled behind for a corner with Chris Martin waiting to pounce at the back post.Leeds had denied Derby a single shot on target but they fell behind after 41 minutes when Will Hughes crossed low from the byline and Mowatt could only turn the ball into his own net as he desperately tried to clear.

Derby almost scored again four minutes later when Richard Keogh got his head to a free-kick but Marco Silvestri saved superbly diving to his left to keep the visitors in the game.But Leeds were caught cold on a freezing night two minutes into the second half when Jeff Hendrick whipped in a free-kick from close to the byline on the left and Buxton found space to head into the top-right corner from eight yards.

Leeds now had it all to do and they were close to conceding again after 56 minutes when Craig Forsyth burst through on the left and crossed but Chris Martin headed wide at the near post.With the visitors forced to chase the game, Derby's pace on the counter-attack threatened further goals and Hendrick had a shot blocked before Jordon Ibe forced Silvestri to punch away a curling shot with 20 minutes remaining.The second half was turning into a stroll for the home side with Leeds showing no sign of getting back in the game and - although they kept going to the end - Derby 'keeper Lee Grant was never seriously tested