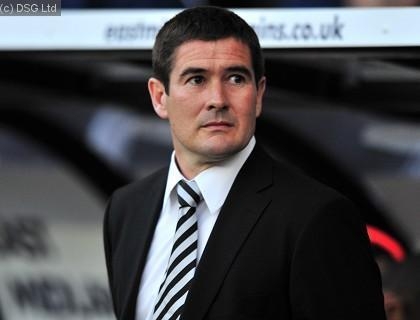 Abdoulaye Faye marked his return to the Hull side with the winning goal in a 2-1 victory at Derby to move Steve Bruce's side level on points with npower Championship leaders Cardiff.

The big defender headed home early in the second half as victory at Pride Park for the third successive season saw the Tigers climb up to second place in the table ahead of Saturday's fixtures.

Robert Koren put the visitors in front but Michael Jacobs levelled things up on the stroke of half-time.

Hull had to survive some late pressure from Derby but the team with the best away record in the division held on for a fourth successive win on the road.

It was only a second home defeat in the league for Nigel Clough's side and they were unfairly booed off by some supporters at the end.

Derby had several players battling to be fit for the game but, in the end, there was only one change from the team that started the victory at Bristol City last weekend. Mark O'Brien had been struggling with illness and did not make it so James O'Connor replaced him at centre-half.

Hull were also forced to change a winning team. Eldin Jakupovic made his debut in goal following David Stockdale's return to Fulham while Faye replaced Alex Bruce, who was sent off against Huddersfield six days ago.

The opening quarter of the match was entertaining despite a lack of goalmouth action, with Derby regularly earning the appreciation of their supporters for the way they pressurised Hull high up the pitch and suffocated their attacks at source.

Jacobs looked threatening down the left and it was good link-up play between him and Will Hughes after 18 minutes that brought the crowd - at 25,442 the biggest at Pride Park since the opening league fixture of the season - to their feet for the first time.

Hull had to make a succession of last-ditch tackles and interceptions to eventually stem the danger as Jacobs and then Hughes attempted to slalom their way through the penalty area and towards goal.

It could be argued that it was against the run of play when the visitors went ahead. Robbie Brady crossed from the left and his dangerous ball across the six-yard line was swept home by the left-foot of Koren.

Craig Bryson had Derby's first shot in anger immediately afterwards, with Jakupovic doing well to hold a 25-yard effort that bobbled in front of him.

Defender Jack Hobbs tried an audacious shot from 40 yards out but Rams goalkeeper Adam Legzdins was spared embarrassment as the ball sailed narrowly over the crossbar.

A half-time deficit would have been harsh on Derby and Jacobs ensured there was no such injustice with a superb equaliser in first-half injury time.

Jacobs' curling cross had to be pushed over by Jakupovic and when Faye could only head Paul Coutts' resulting corner as far as the edge of the area, Jacobs controlled the ball and volleyed a right-foot shot into the bottom corner of the net.

However, Faye made amends five minutes into the second half when he headed home unmarked from close range following a Brady corner.

The hosts continued to work hard, still snapping at the heels of the Hull players when they did not have the ball and probing away in search of another equaliser when they did.

Jakupovic did well to gather Jacobs' deflected shot from a free-kick just outside the area after an hour and the Swiss stopper shone again midway through the second half, pushing Coutts' effort out for a corner.

Hull had to defend numerous balls into their box late on but they were up to the challenge and finished the night in an automatic promotion spot.