Tom Barkhuizen scored a dramatic stoppage-time equaliser for Preston as Derby were held to a 1-1 draw at Pride Park despite Matej Vydra's first goal since the start of October.

The Czech striker looked to have settled a game short on quality early in the second half when he pounced on a deflected shot from former Preston forward David Nugent. 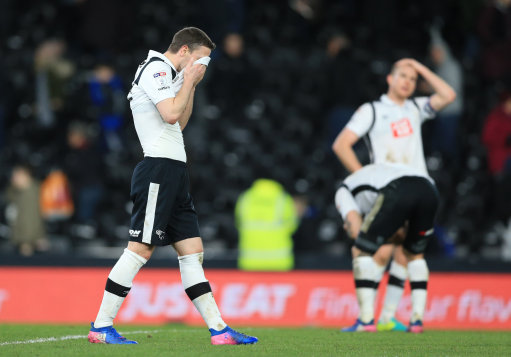 Preston had created few clear chances until the fifth minute of added time when a long ball over the top from Chris Maxwell was nudged to Barkhuizen to secure a draw that does little for either side's fading play-off hopes.

Derby made one change from Saturday's win against Barnsley but Preston reacted to the defeat at Fulham by making four, with defender Andy Boyle making his debut on his 26th birthday.

There was a scare for Boyle and Preston in the second minute when Cyrus Christie's cross from the right found Vydra inside the six yard box but he headed over.

It was Derby's turn to feel relieved four minutes later when Paul Gallagher whipped in a cross that Jordan Hugill connected with but his header flashed wide of Scott Carson's left post.

But Derby were soon enjoying plenty of possession, although Preston almost hit them on the break in the 26th minute when Carson intercepted Hugill's ball in as Aiden McGeady looked set to head in.

Callum Robinson did find the net in the 31st minute but the flag was up for offside and Derby had a chance in the 33rd minute when Christie's cross dropped invitingly for Vydra but he fired over from 10 yards.

There was another let off for Preston in the 38th minute when Maxwell came for a back header but was beaten to the ball by Johnny Russell, who hooked it across but behind. 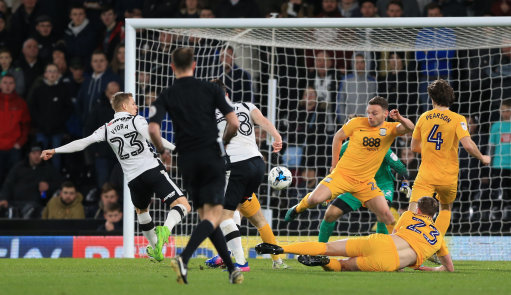 Preston had defended well in the first half but they were undone five minutes into the second when Nugent got in on the right and turned inside for a shot that was deflected to Vydra, who steered it past Maxwell from eight yards for his third Derby goal.

It was now a question of whether Preston could respond and they brought on Daryl Horgan in the 62nd minute, although they were making little impression on Derby's back four.

The home side looked more likely to add to their lead as Tom Ince had a shot charged down after Russell robbed Horgan just outside the area but Preston went into the final five minutes still in the game.

They went close from a corner in the 86th minute, which Paul Huntington met with a header that Christie cleared over his own bar, but the full back almost let Preston in a minute later with a mishit clearance that Barkhuizen lobbed over.

Preston's commitment was rewarded when Maxwell's ball caught Derby and Barkhuizen just got there before Carson to guide a shot that rolled just inside a post.