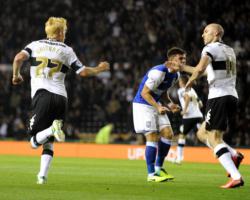 Eustace wins it for Rams Twenty-four years to the day since Derby last beat QPR at home they repeated the feat to keep their Sky Bet Championship promotion challenge firmly on track.John Eustace scored the only goal of the game, more than four-and-a-half years after his last for the Rams, as the division's most potent attack came out on top against the tightest defence at the iPro Stadium.It extended Derby's unbeaten run to five league matches and moved Steve McClaren's men to within a point of Burnley, who currently occupy the second automatic promotion place behind runaway leaders Leicester.Derby had a great chance to take an early lead

With barely a minute on the clock Eustace's ball over the top put Patrick Bamford clear through on goal.However, the on-loan Chelsea forward took too long waiting for the perfect opportunity to shoot, allowing Aaron Hughes to get back and make a challenge inside the penalty area.The 13th minute was nearly an unlucky one for QPR

Only a fine save from Rob Green prevented a bizarre own goal.Clint Hill's clearance cannoned off Jake Buxton and the ball was heading for the top corner of the net, until Green tipped it over the crossbar.It was in the same top corner that Eustace looped his header in the 20th minute.Green came to punch away Will Hughes' inswinging corner but the ball merely brushed his fist and was diverted into the vicinity of Eustace, who returned it with interest.It was the midfielder's first goal since joining Derby on a permanent deal in the summer and his first for the Rams since netting on the final day of the 2008/09 campaign during a loan spell with the east midlands club.The visitors' first real sight of goal came just after the half-hour mark.Eustace nearly undid his good work by giving the ball away to Andrew Johnson but Buxton got across the penalty area to block the striker's shot.QPR came into the game a little more as the first half drew to a conclusion and in its final minute Lee Grant denied them an equalising goal with a good save to push away Hughes' far-post header.There was still time for Green to give QPR a scare as Benoit Assou-Ekotto's backpass rolled under his foot and towards goal, but he managed to recover in the nick of time.Harry Redknapp flexed his muscles at the break by bringing on Modibo Maiga and Junior Hoilett

Johnson and Gary O'Neil exited.Despite the attacking move it was Derby who continued to threaten during the early stages of the second half.Rams replacement Johnny Russell, who came on for the injured Jamie Ward late in the first half, put in a superb cross that both Chris Martin and Bamford were inches away from converting.Hughes' ball into the box from a free-kick was then headed narrowly wide by Buxton.QPR regrouped to apply their most sustained spell of pressure.Joey Barton turned Craig Bryson before shooting from just outside the area but his 63rd-minute effort was plucked out of the air by the diving Grant.A succession of corners followed as the midway-point of the second half approached, one of which flicked off Eustace inside the six-yard box and narrowly over the crossbar.But Derby weathered the storm and continued to ask questions of QPR's creativity.In the end Barton, Hoilett, Niko Kranjcar and substitute Jermaine Jenas had no answer.Hoilett sent a shot into the side-netting in the 83rd minute and that was the last chance that Redknapp's side created