The pressure on Norwich manager Alex Neil increased further as his team crashed to a fifth consecutive defeat at Derby.

Former Norwich midfielder Bradley Johnson settled a tight game in front of 29,000 fans with a sweet second-half strike from 20 yards as a 1-0 win earned the hosts their fourth straight victory 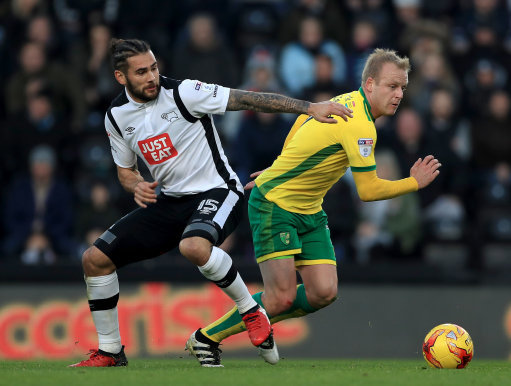 Derby went into the game full of confidence, but Norwich had a chance to lift theirs in the second minute when Johnson gave the ball away cheaply to his former club

Steven Naismith set Wes Hoolahan up, but he hesitated and the danger was cleared.

Hoolahan did not pass up an invitation in the 10th minute when Derby backed off him and his shot from just outside the area went narrowly over.

But Derby had the first effort on target in the 16th minute when Darren Bent's clever pass gave Tom Ince a chance from 20 yards, but his drive was straight at John Ruddy.

But Norwich were not playing like a team on a bad run and they caused more problems in the 21st minute when Naismith ran at the defence and appeared to be caught by Johnson just outside the area, but referee Simon Hooper waved play on.

Derby were struggling to establish any measure of control, but they nearly profited from a loose pass in the 29th minute that allowed Jacob Butterfield to fire in a shot that took a deflection and almost wrong-footed Ruddy.

The first half ended with Cameron Jerome struggling and it was no surprise when he was replaced by Kyle Lafferty at the start of the second, which began with Bent seeing a shot blocked on the edge of the area.

But Norwich had a good chance in the 50th minute when Naismith got in down the right and his low drive was turned behind by Scott Carson.

Ruddy made an even better save at the other end six minutes later to keep out a low shot from Bent after an excellent cross-field pass from Johnson.

There was another chance for Derby in the 61st minute when Ince turned away from Robbie Brady before unleashing a 25-yard shot that swerved narrowly past Ruddy's right post.

Sebastien Bassong got a vital touch on a low shot from Butterfield to put the ball behind, but Derby made the breakthrough in the 65th minute when Will Hughes set up Johnson, whose precise strike from 20 yards arrowed into the bottom left corner.

Johnson's celebrations were muted, but it was a goal that could have serious consequences for Neil.

His side could not respond and it was Derby who almost scored again on the break when Ruddy just beat Ince to the ball.

Alex Pritchard had a chance to rescue a point for Norwich in the third minute of stoppage time with a 25-yard free-kick, but Carson saved comfortably.