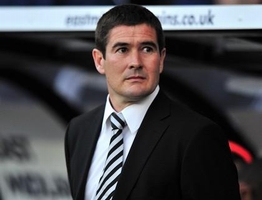 Callum Ball's third goal of the season proved the difference as Derby edged past Coventry 1-0 to record a fourth successive npower Championship victory.

Points often matter more than performances over the second half of the season and it was far from a vintage display from the in-form Rams, particularly during a first half in which rock bottom Coventry thrived.

Yet, with just 20 goals to their name this term and only six coming on their travels - the lowest scorers in the Football League - the Sky Blues failed to take advantage, something which will surely not be helped by today's departure of nine-goal top scorer Lukas Jutkiewicz to Middlesbrough.

No sooner had County goalkeeper Frank Fielding pulled of a brilliant save to deny Gary McSheffrey, Derby, much improved in the second half, grabbed the only goal of the game in the 75th minute courtesy of 19-year-old Ball's right-footed finish from 12 yards.

It proved enough to take the Rams up to seventh place in the table while Coventry, the only team of all 92 in England's top four divisions still to taste an away victory this term, remain seven points from safety.

Coventry started firmly on the front foot and Derby stopper Fielding was first to be called into action after seven minutes as he parried McSheffrey's shot to safety.

The out-of-sorts hosts were struggling to get out of the blocks and their opening effort of any kind came after 20 minutes as Jamie Ward's tame strike was comfortably collected by Joe Murphy.

McSheffrey fired over the bar when well placed just inside the area while Ward again tested Murphy.

Based on the opening half-hour, the majority of the 24,126 present would have been mistaken for confusing the Championship's bottom club with the one chasing a play-off place.

Derby's six-goal leading scorer Theo Robinson saw an overhead kick deflected off target as the home side enjoyed a brief renaissance, with Carl Baker heading into the side-netting at the other end before the first half came to an end.

But much-improved County started the second period with purpose, Ball, Paul Green and Jason Shackell all giving Murphy plenty to think about.

Baker and Gary Deegan fired wide from distance for the Sky Blues before the lively Ward whistled a 25-yard free-kick inches wide of Murphy's left-hand post.

Derby were now looking much the more likely to break the deadlock and Robinson blasted over from a good position.

Fielding came to Derby's rescue to parry away McSheffrey's headed touch from Baker's free-kick, and the save proved crucial as the hosts registered the winner just two minutes later.

Craig Bryson found Ball from the right side of the penalty area and the teenager rifled into the bottom corner to seal all three points.