Derby won at home for the first time since Boxing Day and the 1-0 victory over Blackburn keeps them in the Sky Bet Championship promotion race.

An outstanding early strike from Jacob Butterfield settled a game lacking in real quality and, although Blackburn had plenty of possession, they created few clear chances until stoppage time when Jordi Gomez headed against the top of the bar. 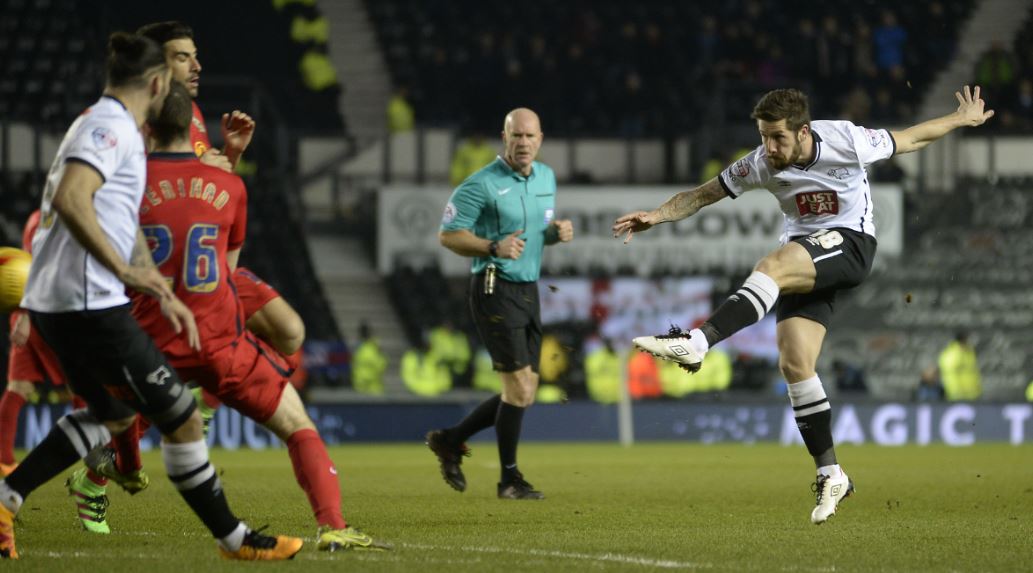 Blackburn came into the game having failed to win any of their previous five league meetings with Derby and they were trailing after seven minutes when Butterfield turned on a headed clearance on the edge of the area to send a shot into the bottom left corner.

It was an excellent finish from a player who has scored some spectacular goals this season but Blackburn responded well with Danny Graham, who had a loan spell at Derby in 2005, almost breaking clear six minutes later.

Derby's first league win of 2016 at Brentford on Saturday had clearly restored confidence given the way they moved the ball around, with Jason Steele forced to scramble to hold a deflected shot from Johnny Russell, but Blackburn had a chance in the 21st minute when Ben Marshall got in on the right only to chip tamely into the hands of Scott Carson.

Graham had a great chance to equalise in the 32nd minute when he held off Richard Keogh before turning Jason Shackell to open up the goal but, from 10 yards out, he spooned the ball over the bar.

It was a big let-off for Derby and they came close to increasing their lead in the 43rd minute when Cyrus Christie back-heeled the ball to Russell who whipped a shot from just inside the area past Steele's right post.

Blackburn began the second half brightly but were let down by a lack of quality with the the final ball which Derby delivered to create two chances in the space of a minute.

First Russell was denied by a superb tackle from Shane Duffy before Chris Martin went through in the 60th minute only for Steele to save diving to his right.

Blackburn did find a telling pass when Darragh Lenihan played Graham in but the angle was tight and his shot was comfortably saved by Carson, who had a far more demanding stop to make in the 72nd minute when he clawed away a 25-yard free-kick from Marshall.