The former Aston Villa and Sunderland striker netted the decisive spot-kick in the 64th minute after Blues defender Michael Morrison was adjudged to have fouled Richard Keogh following a corner.

The win was County's eighth from their last nine league matches as they moved up to seventh and just a point behind Sheffield Wednesday, who occupy the final play-off spot.

While they managed to shut out their opponents for their seventh consecutive clean sheet at Pride Park, Birmingham remain without a win under Gianfranco Zola.

Zola was hired in the wake of the controversial sacking of Gary Rowett, but the Italian has overseen two losses and his side are now six points adrift of the top six after nine of the 10 sides directly above them all won in this round of fixtures.

They were second best throughout as Derby bossed both possession and territory from start to finish in one of their best displays at home this season.

City's well-drilled team did manage to frustrate the Rams for an hour, with their hard-working 4-5-1 formation proving resolute and tough to break down.

But once Bent opened the scoring there was only going to be one winner.

City were unable to come up with a response to get back into the game and failed to register a shot on target for the whole 90 minutes.

Bent headed Johnny Russell's cross just wide for Derby as the game started at a frantic pace, while Jacob Butterfield hit a long range effort straight at Tomasz Kuszczak as Birmingham continued to frustrate the home side.

Bent thought he had made the breakthrough shortly afterwards when he found the back of the net, only to have his effort chalked off for offside.

Derby maintained a fast tempo at the beginning of the second half and Kuszczak had to be alert to block Bent's attempted lob and then Tom Ince's follow-up after Ryan Shotton's backpass fell woefully short. 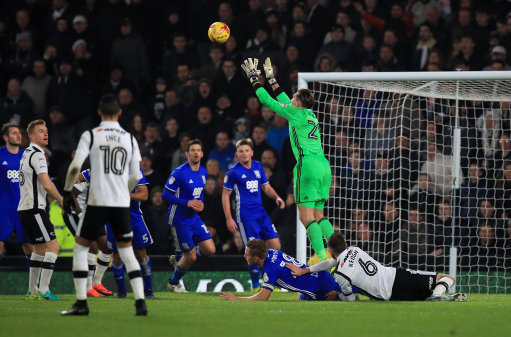 Derby were awarded a penalty when Morrison tugged Keogh over during a Butterfield corner routine in the 64th minute.

And Bent made no mistake from 12 yards as he sent Kuszczak the wrong way to drill the ball in off the post.

Russell rifled a powerful effort wide as Derby looked to wrap up a deserved three points and the Scot then blazed another shot over from a narrow angle after a Will Hughes pass created another opening.