Hull soaked up the early pressure before hitting Derby with three goals to put themselves firmly in the driving seat in their Sky Bet Championship play-off tie.

Returning to the scene of a 4-0 thrashing during the regular season just last month, Steve Bruce's team looked set for another difficult day at the iPro Stadium but took the lead against the run of play through Abel Hernandez after half an hour.

Thereafter Hull settled, Derby's confidence drained away and a Jason Shackell own goal five minutes before half-time put the visitors in control.

The Rams toiled in the second half as they tried in vain to get back into the game and Andy Robertson delivered what could be a killer blow to Derby's promotion hopes deep into injury time on the break, sealing what in the end what was a comfortable 3-0 victory to take into the return leg on Tuesday night. 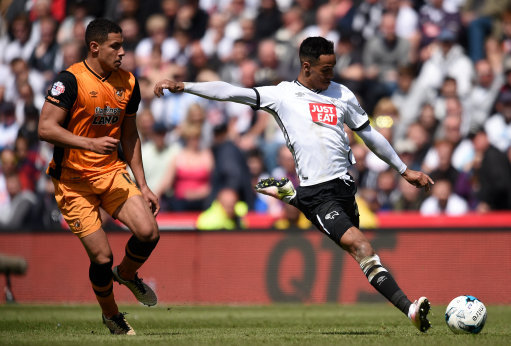 It was a high-tempo start from both sides but there was little to trouble either goalkeeper.

Derby gradually began to look the more threatening team and enjoyed a sustained spell of pressure as the midway point of the first half approached, but three corners and a free-kick in a dangerous position just outside the penalty area came to nothing.

It was no coincidence to see the hosts start to control possession the more Will Hughes got on the ball and the talented young midfielder linked up well with Chris Martin before he sent a shot wide.

It was totally against the run of play when Hull went ahead, although Derby contributed to their own downfall.

A loose touch from Bradley Johnson following a long punt forward from Eldin Jakupovic sold Shackell short, allowing Jake Livermore to seize the ball and tee up Hernandez who rolled a left-foot shot from 25 yards out into the bottom corner of the net.

Derby were lucky to escape when Mohamed Diame dragged his shot wide after being afforded time and space inside the penalty box.

If Johnson, Shackell and Scott Carson could all have done better for the opening goal, there was little Derby could have done to prevent the second as Hull benefited from a huge slice of fortune

Moses Odubajo's shot struck first Markus Olsson and then Shackell and flew past Carson, who was left wrong-footed.

It was an escape for the hosts.

Hull then proceeded to take the sting out of the game, seemingly content with what they had and happy to try to hit Derby on the break

The Rams had little in response.

A rare second-half effort saw Diame bring a comfortable save from Carson with a long-range shot after 67 minutes.

Shortly afterwards at the other end, Cyrus Christie sent a header over the crossbar and it was not until the 80th minute that Derby had their first effort on target - substitute Jacob Butterfield's shot straight at Jakupovic from 20 yards out brought ironic cheers from the home support.

Odubajo led the break before fellow full-back Robertson sent a shot into the bottom corner.