Newcastle's surge up the Sky Bet Championship table gathered momentum as they won 2-0 at the iPro Stadium to claim a fourth straight victory and condemn Derby to a first home defeat of the season.

A goal in each half from Yoan Gouffran and DeAndre Yedlin gave Newcastle a deserved three points in front of a 30,000 plus crowd and underlined their promotion credentials. 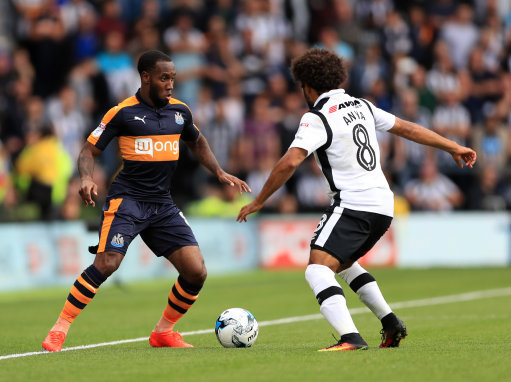 Derby had their moments but never really threatened and have now scored only once in six Championship games.

The Rams gave full debuts to James Wilson, Matej Vydra and Ikechi Anya and there was also a change of referee with fourth official Darren Bond replacing James Linington who pulled a hamstring before kick-off.

The ball was in the Newcastle net inside the first minute but Anya strayed offside before cutting the ball back and after a tight opening 20 minutes, the visitors took the lead with a stunning goal.

Dwight Gayle had a shot deflected behind for a corner and when Jonjo Shelvey swung the ball across, Gouffran sent a volley arrowing into the bottom right corner from 12 yards.

It was a superb finish but Derby's marking was questionable and the home side tried to respond when Cyrus Christie made a surging run from right-back to the edge of the Newcastle box before playing in Craig Bryson whose cross was headed away.

Anya was busy down the left and got into some promising positions without delivering.

But Derby broke dangerously in the final minute of the first half only for Bryson to lose control as he ran into the area and the ball went behind for a corner which was cleared.

Derby started the second half strongly with Anya drifting a cross just past goalkeeper Matz Sels' left-hand post and Vydra turning away from two defenders before he was crowded out on the edge of the area.

Newcastle quickly settled back into the possession football of the first half and Mohamed Diame created a great chance for himself in the 59th minute when he accelerated away from Jason Shackell but shot wastefully wide from the edge of the area.

Derby came close to an equaliser twice in the space of 60 seconds when first a Bryson shot from just outside the area swerved and forced Sels to fist the ball out before Anya almost deceived the keeper with a cross that bounced behind off the top of the crossbar in the 68th minute.

Newcastle had another chance to put the game beyond Derby in the 83rd minute when substitute Yedlin broke away down the right but his cross was too fierce for Matt Ritchie to convert on his 27th birthday.

Diame wasted a great chance four minutes later with a tame shot that Scott Carson easily saved with Yedlin unmarked on his right, but the former Spurs man sealed victory in time added on when he bundled in a low cross from Ayoze Perez.