Nigel Clough marked his return to the club that sacked him in September 2013 by delivering another blow to Derby's play-off hopes as Burton boosted their survival chances with a 0-0 draw at Pride Park.

Clough's team spent most of a disappointing game in their own half but Derby lacked the craft and confidence to break them down and created few chances. 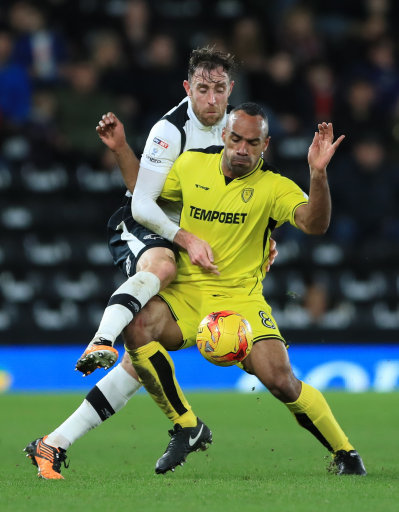 Darren Bent, who had scored four goals in the previous two games, missed the best chance in the first half and Derby created little in the second as Steve McClaren's team failed to win for the third consecutive home game.

Burton went into their first ever game at Derby without injured midfielder Michael Kightly, who had scored in the previous three matches, while the home side replaced both full-backs.

Clough was relaxed in his technical area but his side had a scare in the 11th minute when Julien de Sart's crossfield pass put Tom Ince in on the right but he pulled his shot wide.

There was certainly an edginess about Derby's play, with passes going astray, although Burton were also giving the ball away cheaply in a game that cried out for some quality.

Instead, it was a moment of good fortune that should have broken Burton's resistance in the 42nd minute when a low Ince shot bounced off a yellow shirt to Bent but the striker shot over from two yards.

Burton responded with their first attempt on goal a minute later but Luke Varney, who scored the winner for Ipswich at Pride Park earlier in the season, headed straight at Scott Carson.

But that late flurry of goalmouth action could not disguise the fact it had been a poor first half and Derby started the second with an urgency that saw Jacob Butterfield force Jon McLaughlin to tip over a drive 20 seconds after the restart.

The worry for Burton was their inability to keep possession and relieve pressure on the defence and although Lloyd Dyer flashed a shot across the Derby goal in the 67th minute, it was a rare threat from the visitors.

But Derby were struggling to turn dominance into chances and when Ince did get in on the right in the 79th minute, he was quickly closed down by a combination of McLaughlin and two defenders.

Ince's frustration spilled over when he was booked for a late challenge and although there was a late scare when David Nugent shot wide in stoppage time, Burton deservedly gave Clough reason to smile at the final whistle.