Derby goalkeeper Scott Carson denied his former club with a superb first-half save as Aston Villa had to settle for a point in a 0-0 draw in front of 31,000 fans.

The former Villa stopper tipped a Ross McCormack shot against the bar in a first half dominated by the visitors with Gary Gardner also striking the Derby woodwork. 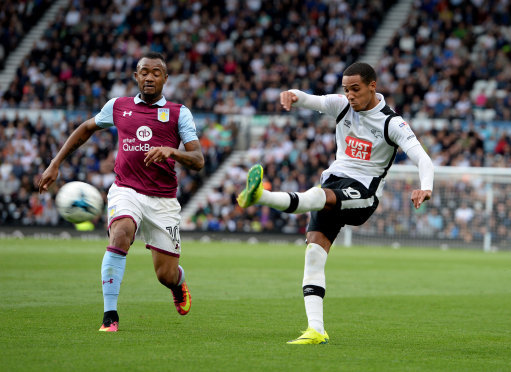 Derby were much better after the break and Tom Ince wasted a good chance as Nigel Pearson's side played out a goalless draw for the second Championship home game running.

Villa's latest signing Miles Jedinak was still waiting for clearance following his move from Crystal Palace so they made only one change, with Gardner coming in for the injured Aaron Tshibola, while Derby named the same side that beat Preston on Tuesday night.

The visitors started confidently without troubling the Derby defence until the 17th minute when Jack Grealish played the ball inside for Ross McCormack, whose 20-yard drive was pushed against the bar by Carson.

Carson made a more routine save three minutes later when Rudy Gestede headed a corner straight at him from 10 yards and he was tested again when Grealish held off two defenders but failed to get enough power in his low shot from 15 yards.

Villa were controlling the play but they had to make a change in the 28th minute when Gestede was replaced by Libor Kozak although it did not disrupt their rhythm and they were unlucky not to take the lead in the 37th minute.

Gardner surged forward and exchanged passes with McCormack before bending a 25-yard shot past Carson but against the inside of the right post.

Apart from a couple of long-range efforts from Ince, Derby had created little but James Chester had to be alert to cut out a Cyrus Christie cross before it reached Johnny Russell.

Derby made a change at the start of the second half, replacing Jacob Butterfield with pacey Guinea winger Abdoul Camara, and they had their first clear chance in the 48th minute when a mistake allowed Ince to go clear but he shot straight at Pierluigi Gollini.

The home side were playing with more urgency than they had shown in the first half and Chris Martin glanced a header wide before a Tommy Elphick challenge stopped Ince on the edge of the box.

After a flurry of yellow cards, Derby had to make a second change in the 66th minute when Craig Forsyth, who has just returned from a serious knee injury, had to go off and Villa almost scored three minutes later.

A McCormack corner caused panic in the Derby defence and Elphick's half-volley was cleared off the line by Will Hughes and Villa had another chance in the 76th minute when Kozak headed wide at the back post.

Derby brought on Darren Bent and the ex-Villa man headed a Christie cross wide before Camara looped a header over in stoppage time.