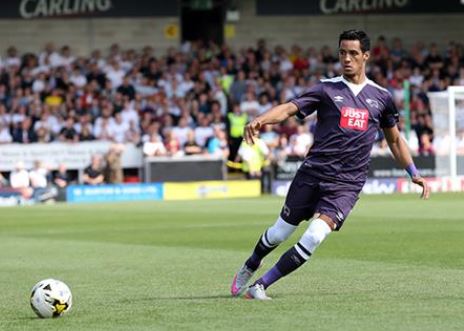 In the final pre-season friendly game before the start of the 2015/16 Football League season Derby County beat Burton Albion 3-1 at the Pirelli Stadium.

I always look forward to the annual friendly between the Brewers and the Rams. I like to think of it as the friendly friendly. It’s the one game where the Police and Stewards don’t have to worry about supporter segregation because there’s never any trouble. Probably because most people in the crowd support both teams, or support one and follow the other, or, at the very least, have a soft spot for the team they don’t support.

Take me for example. My Mum and Dad have always been Derby County supporters. I’ve been a Derby County supporter for as long as I’ve known about football. Growing up, I got my Rams fix from Star Soccer on ITV on a Sunday afternoon. Yet I’m a born and bred Burtonian. I grew up in Winshill, going to Hawfield Lane Infants, Bend Oak Junior, and Abbot Beyne schools. I only found out there was a Burton Albion when I started listening to the fantastic Graham Richards commentating on Derby County matches for BBC Radio Derby. By then, my heart was already pumping black-and-white blood through my veins.

Derby County won with goals from Darren Bent, Andreas Weimann, and Johnny Russell, although Timmy Thiele briefly made the match a contest when he pulled the score back to 1-2.

Paul Clement employed a 4-2-3-1 system for the first time and the Derby County players took to it as if they’d been playing it all pre-season long.

Before kick-off I’d thought of this system as a defensive system but that’s not the way the Rams approached it.

Essentially the system revolves around a defensive square consisting of two central defenders with two defensive midfielders in front of them. This allows the two full-backs to push forward at every opportunity – often making the system look more like a 2-2-5-1.

When the opposition have the ball, the two defensive midfielders split and cover wide until the full-backs get back into position. The front four play with a lot of fluidity, creatively interchanging, , keeping the ball on the deck, passing it quickly, and running off-the-ball.

The main advantage I saw was that Ryan Shotton and Jason Shackell in central defence, and captain Chris Baird and George Thorne as the defensive midfielders, had plenty of time on the ball and were able to get it forward quickly without the need to pass across the back or involve goalkeeper Scott Carson. And defensively these five were very solid indeed.

Cyrus Christie and Craig Forsyth were confident and positive as attacking wing-backs, getting forward effectively and hitting low crosses into the penalty area. Forsyth defended well. Christie got caught out a couple of times early on, but grew into his defensive responsibilities as the match progressed.

Up front the system suited Bent who was able to find the right balance between playing on the defender’s shoulder looking for the through ball and dropping deeper to receive the ball to feet and link play. There was no need for his team-mates to hoof high balls up to him as the system meant they always had options to pass the ball to feet.

Russell and Weimann, as the wider of the three attacking midfielders, saw plenty of the ball, caused problems for the Brewers defence, and both got on the scoresheet. Thomas Ince, as the more central attacking midfielder, drifted in and out of the game but still had chances to score a couple of goals.

The game may have gone differently though had Burton Albion had a little more luck on 4 minutes. The excellent Nasser El Khayati cut inside, beating Christie too easily, and unleashed a curling shot that rebounded back off the post, hit the legs of a Rams defender, and flew over the bar.

On 10 minutes Derby County took the lead. Thorne dispossessed former-Ram Tom Naylor and threaded a lovely ball through to Bent. Although outside the penalty area, and slightly off-balance, Bent hit a hard low shot beyond goalkeeper Remi Matthews and into the bottom corner of the net.

Mark Duffy tested Carson with a long range shot but the Rams goalkeeper was more than equal to the task.

Good work by Christie down the right saw him cross low into the box and Bent’s shot was blocked by Phil Edwards.

The Rams doubled their lead a minute shy of the half hour mark. Russell played the ball into Weimann, the Austrian international turned and fired a shot over Matthews into the back of the net.

El Khayati tested the Rams goalkeeper again from long range and this time Carson juggled the ball into the air, catching it on its way down.

Forsyth played a low cross into the danger area, for Ince who, losing his balance, still managed to toe poke the ball goalwards but Matthews saved it with his foot.

A lovely move saw Thorne hit a raking crossfield pass, Christie controlled it on his chest, ran the ball forward, crossed low, and Weimann’s shot was brilliantly saved by Matthews.

After the break the Rams continued to pass the ball around the Pirelli Stadium pitch with confidence.

A flowing move involving Ince and Baird saw Christie send a high cross to the far post and Bent’s header was deflected for a corner.

Bent played in Ince and Matthews produced a great save to deny him a goal.

On 58 minutes Burton Albion pulled a goal back. Anthony O’Connor headed a free-kick against the crossbar, as the ball bounced down in the goalmouth the Rams defenders were slow to react and Thiele slammed the ball into the back of the net through a crowd of players.

The Brewers were unlucky not to equalise when Jerome Binnom-Williams set-off on a surging run from the halfway line, Isak Ssewankambo at full pace nearly won the ball with a sliding tackle, but Binnom-Williams somehow came away with it, continued his run into the penalty area passing a number of Rams defenders, and blasted a powerful shot over the bar.

Ince slid the ball through to Chris Martin who sent his shot flying over.

In the 71st minute Derby County restored their two-goal advantage. Forsyth controlled a raking crossfield pass, took the ball on, and crossed into the penalty area. A headed clearance fell to Jeff Hendrick who hit a volley from outside the penalty area. Russell trapped the ball, turned, and fired past Matthews for his fourth goal of pre-season.

At the other end Thiele had a far post header blocked by a crowd of defenders, and shortly after had a shot deflected wide. From the resulting corner, Tom Flanagan headed wide.

A fantastic flowing move saw Dawkins, Hughes and Hendrick all link up, Russell threaded the ball through to Martin who cleverly back-heeled the ball into the path of Ssewankambo, only for Matthews to push his shot out for a corner.

Hendrick hit a free-kick hard and low around the wall and narrowly wide of the goal.

Late on Burton Albion’s Kelvin Maynard came off worse in a 50-50 challenge with Jamie Hanson and the Brewer had to be stretchered off. 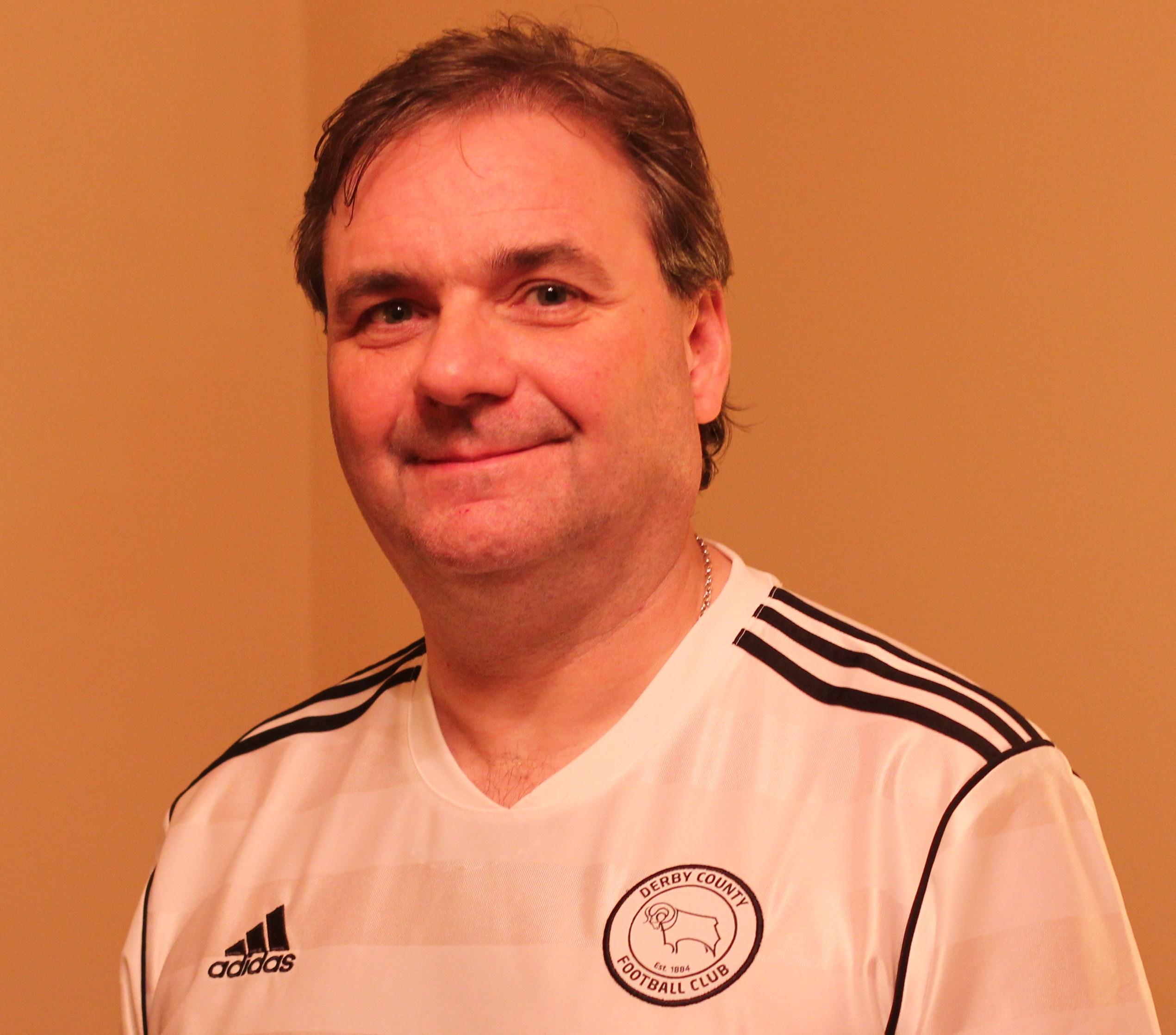