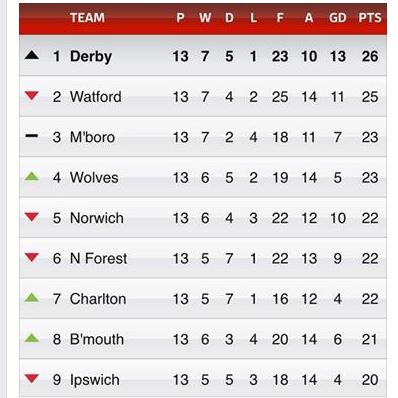 That sounds good, doesn’t it?

We are top of the league. Last night Derby County travelled to the North West Coast and returned from Blackpool with three points, enough to secure top spot in the Sky Bet Championship. Of course, you don’t win anything, least of all promotion to the Premier League, by being top of the league in October.

It’s where you finish after 46 games, not 13, that determines who goes up (and who goes down) but victory for the Rams last night sends a strong message to the rest of the Championship. Make no doubt about it, Derby County went into the Blackpool game under a lot of pressure. At the weekend the Rams had ridden their luck somewhat at the Madejski Stadium to return with a fantastic 3-0 victory over Reading, grabbing second place in the league table. The Reading game came at a cost though – Jamie Ward (thigh strain) and Lee Grant (ankle) both picked up injuries and have been ruled out for 4-6 weeks. Skipper Richard Keogh came off with a head injury and Craig Bryson was unwell. Add to that hip flexor injuries to Simon Dawkins and Paul Coutts, plus long-term absentees Shaun Barker and George Thorne, and the Rams had an ever growing injury list to deal with.

Derby County have a strong squad though with plenty of depth and quality. That’s what we’ve been saying since the summer transfer window closed and now we’ll get an opportunity to see just how strong this squad actually is. Injuries aside, though, the pressure was on. Blackpool were bottom of the league, 5 points from safety, with only one win all season. Everybody, including me if I’m honest, expected Derby County to go to Bloomfield Road and win. But that’s being disrespectful to Blackpool.

The Championship is a tough, competitive league, and as we see every week, on any given day, anybody can beat anybody. Blackpool manager Jose Riga walked into a club in crisis in the summer with only eight players and no goalkeepers. Now, 13 games on, Riga has brought in his own players and has now assembled a settled squad. In recent weeks, their performances have improved – they beat Cardiff City recently – and they’ve been unfortunate not to pick up more points than they have. And, as if that wasn’t enough, a very young Derby County squad had the added pressure of going into the game knowing that a win could see them go top of the league and that a clean sheet would equal a club record of six consecutive clean sheets.In the end manager Steve McClaren made five changes from the team that started against Reading. In came Ryan Shotton, Jeff Hendrick, Johnny Russell and Omar Mascarell, four players who clearly demonstrate the strength of the squad, plus on loan goalkeeper Jack Butland.

I was impressed by the speed in which McClaren made his move to bring in a replacement goalkeeper. Maybe a little harsh on Kelle Roos after his Carling Cup performances, but there’s no doubting Butland’s ability and potential. Compared to former manager Nigel Clough’s goalkeeper loan signings of  Brad Jones, Dave Martin and Matt Duke, England U21 goalkeeper Butland is quality – as he proved during a tough opening 20 minutes against Blackpool.

The Rams had to be patient. Conditions were extremely difficult in a wet and windy Bloomfield Road but Derby County worked hard and eventually got their reward. Russell burst into the penalty and was brought down. Chris Martin converted the penalty, the Rams were 1-0 up, and they saw out the game to go top of the league and equal that club record of six consecutive clean sheets.

Derby County are now unbeaten in 12 games, have lost only once all season, have not conceded a goal in 575 minutes of football, and are top of the Championship. Next up in the league are Wigan Athletic (home), Brentford (away), Huddersfield Town (home) and Wolverhampton Wanderers (home).  Three home fixtures in the next four league games. Wigan are 19th, Brentford 12th, and Huddersfield 16th. Without wishing to be disrespectful to those three football clubs, the next three fixtures present Derby County with an excellent opportunity to pull away at the top and create some breathing space between themselves and the chasing pack, before a tough home fixture against Wolves.

You don’t win anything in October but there are 23 Championship sides who would gladly swap places with Derby County right now. In the Championship, the Rams have conceded less goals (10) than anybody else; only Watford have scored more than Derby’s 23 goals, and the Rams have the best goal difference (+13).

No signs of a hangover following last season’s defeat in the Championship play-off final.

And Derby County are still in the Carling Cup too, although I fully expect McClaren will further utilise the strong squad he has available for the away tie at Fulham.Nothing is won yet, there’s a long way to go still this season, another 33 league games to play, a further 99 points to compete for, but let’s enjoy this moment.