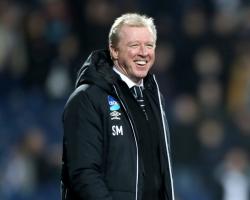 Tom Ince and Darren Bent struck inside four second-half minutes to record the Rams' first FA Cup victory over a higher tier side since 1986 and seal a 2-1 win.

They cancelled out Matt Phillips' opener to surprise the Premier League club and secure Derby's first triumph over a top-flight team for eight years.

McClaren's side have lost just once in their last 12 games and are also seventh in the Sky Bet Championship, and the manager was delighted with their efforts at The Hawthorns

He said: "You've got to perform to come here and win

It was a fantastic reaction after Monday (a 3-0 defeat at Norwich).

"That's what we asked for in terms of performance

The bonus was the result as well

There were some heroic performances out there.

"The performance, fight and character was excellent and the bonus was the result."

Ince scored his ninth goal of the season when he deceived Boaz Myhill with a free-kick and McClaren urged the wideman to maintain his form.

"He has got to keep that going

It is consistency, it is doing it week in and week out, day in and day out, and being relentless, just keep going, keep going," said the ex-England boss.

"That is what he has done

He has got great ability and can finish and score

Maybe the response is better

"We just allow him to go and play and he does the work as well, up and down, he has got great fitness and he should be a Premier League player."

Boss Tony Pulis said: " I didn't see it coming, even after they scored their goals

The two goals are disappointing

I still thought we did enough to not get beat today

"I thought we battered them at times

We got in 60 crosses today, had nearly 30 shots

I'm not sure how many were on target

All the stats show we've had a right go today

Derby defended heroically, you can't take that away from them

We're really disappointed because the players have played well and given it everything."