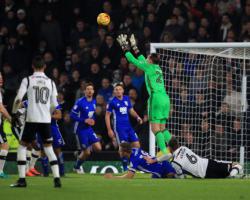 All the action from the Rams historic 7th clean sheet at the Ipro in a row.
A controvertial penalty diveded the two sides but gave the Rams the three points and a piece of Derby County history with a seventh consecutive clean sheet at the Ipro stadium.
Derby moved up the seventh place with the win and stay in touch with the promotion chasing pack.