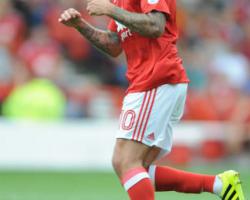 The attacking midfielder would be a good acquisition for the Rams and may be the added ingredient that propels Derby to a play-off place, or better.

At 26 years of age Lansbury has many more useful years ahead of him at the heart of the midfield and Forest may be tempted to cash in on their captain as his contract runs out at the end of the season.

Starting his career at Arsenal, Lansbury had limited opportunities when at the North London club

Norwich had Lansbury on loan when they last achieved promotion and was also part of the West Ham squad who also went up to the Premiership.

Lansbury has come up through the ranks for England at International level, playing at U16,U17,U19 and U21 level

The Rams are not alone in their interest in Lansbury, Premiership Watford are thought to be Derby's challenger for his signature but it is not thought any fee has yet been put forward by Watford.