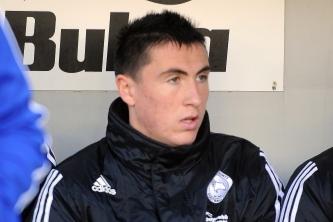 Derby County on-loan striker Callam Ball faces an undetermined period on the sidelines after a small piece of bone has become detached from his right ankle.

The injury to the twenty year-old was first thought to be just a fracture but further investigations proved that the bone had become detached from the ankle. Ball has now been referred to a specialist to determine if this is a new injury or has been a log standing problem that has now forced the striker to sit out the busy Christmas period.

The time Ball will be out of the game has not yet been determined and will depend on the findings of the specialist, in the mean time Ball has been fitted with a boot to keep the injury stable.

Ball’s loan period was for the whole of the 2012-13 season and had had already made 16 appearances for Coventry City, and scoring on three occasions...