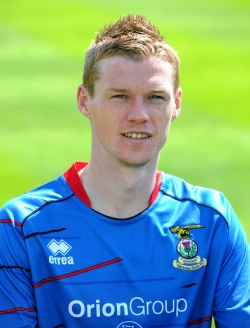 Derby County could be thinking of an approach for Scottish Premier League striker, Billy McKay. The 24 year-old striker has been in sparkling form this season with Inverness Caledonian Thistle, scoring 11 goals from 15 appearances so far.

The former Northampton goalscorer has been on the Rams shopping list for a while but Nigel Clough stated recently that there will be no further transfer deals during the New Year window, so doubt hangs over the validity of the interest in McKay, although his scoring rate of one goal in every three played must be of interest to the Rams and other leading Championship clubs.

Cally Thistles manager, Terry Butcher has also stated he hopes that McKay will stay with the club and sign an improved contract deal rather than returning to England. Other clubs mentioned with interest in the striker are Championship rivals Millwall, the London club now sits in sixth place in the Championship table and four points ahead of the Rams...