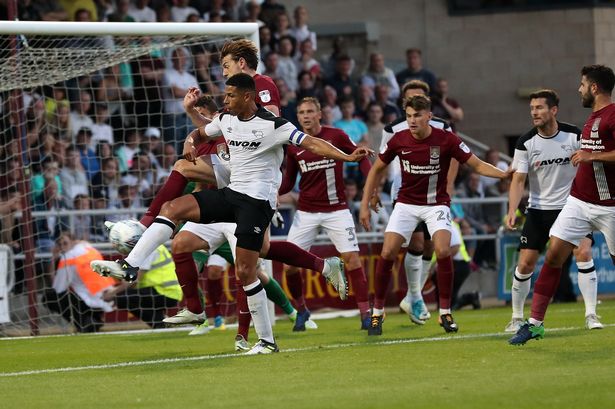 Derby County struggled to deal with a Northampton Town side last night as they lost by the single goal.

The Rams put out a side that was strong but with an eye on the impending start to the season in just ten days time. Scott Carson was rested and Jonathan Mitchell played in goal.

Richard Keogh was rested and in came Curtis Davies, who gave a sterling performance along side Alex Pearce. Chris Baired and Marcus Olsson making up the rest of the defence.

In Midfield the Rams played Craig Bryson, Jacob Butterfield and Ikechi Anya. Bryson having a somewhat quite game for his standards, Butterfield had a steady enough game but some of his dead ball kicks need improvement. One particular free kick being scuffed and never rising more than two inches off the ground. Anya had a busy opening half but despite the speedy jinking runs, the end product just wasn't there.

Up front the Rams went again for Mason Bennett and David Nugent. Bennett continued his impressive run of form he has shown over the course of the pre-season friendly games and had two first half shots saved well by the Northampton keeper.

Nugent playing a slightly deeper attacking role on the night was less impressive but did have a gilt edged chance to level the game but blazed wide.

Derby can't complain about the result, they just weren't clinical enough in front of goal and again the defence conceded a well worked and clinically finished goal from the League One side.

The Rams did look better when Tom Huddlestone, Andreas Weimann and Chris Martin came on to try and save the evening. Huddlestone was again majestic in midfield, seeming to have more time than anyone else to stroke balls around the field but it was too little and too late in the day to deny Northampton a deserved win.

We all now move on to the pre-season showcase game on Saturday at Pride Park against TSG 1899 Hoffenheim. The side should be strong as the Rams perform before their home fans for the first time before the season starts in just six days afterwards and maybe a good idea of the season's starting line-up will be known.