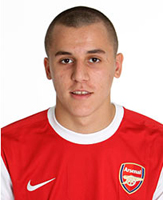 Alban Bunjaku (20) may sound exotic but the former Arsenal youngster was actually born in Romford. He is however a Kosovan International.

Starting his football career at Arsenal, he joined the club aged just eight years-old. He then went through the Arsenal system until leaving them to further his career in Span with Sevilla.

Bunjaku Joins Derby County on a free transfer from Sevilla and will join up with his new collegues when they return from their summer break. He has signed on a two year deal.