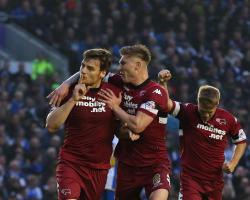 Steve McClaren's team had taken a significant step on the road to Wembley with their 2-1 win in the first leg at the Amex Stadium on Thursday.

And the Rams, bidding to return to the Premier League after a six-year absence, finished the job in ruthless fashion in front of their jubilant supporters at the iPro Stadium.

Will Hughes opened the scoring in the first half and strikes from Chris Martin, George Thorne and Jeff Hendrick after the interval capped an eye-catching display from hosts.

In the final on May 24, Derby will face QPR or Wigan, who play the second leg of their semi-final at Loftus Road on Monday after a goalless first leg.

Kazenga LuaLua got one back for Brighton in the final moments, but they were left with a familiar feeling of frustration after losing in the semi-finals for the second consecutive year following their exit against Crystal Palace 12 months ago.

Derby, who finished 13 points ahead of the Seagulls in the table, had won all three of their previous meetings with Brighton this season.

No Championship side had reached the play-off final after losing the first leg at home and Derby set out to ensure those statistics didn't come to an end at their expense.

They threatened twice in the early stages Andre Wisdom tested Brighton goalkeeper Tomasz Kuszczak from 20 yards before Craig Forsyth shot wide as the ball ran invitingly to him on the edge of the area.

Brighton suffered a blow when defender Gordon Greer limped off with a hamstring strain and the hosts didn't take long to break down the reshuffled rearguard.

Young midfielder Hughes made the goal himself as he audaciously flicked Forsyth's cross around one leg before driving his shot into the far corner in the 34th minute.

Any chances of a Brighton revival were dashed when Martin barged his way between two Brighton defenders to fire past Kuszczak 12 minutes after half-time.

The Derby celebrations were in full swing by the time Thorne made it three when he lashed home a half volley from 25 yards in the 76th minute.

Hendrick thumped in Patrick Bamford's cut-back in the 87th minute for the fourth before LuaLua netted Brighton's lone reply in the final moments.