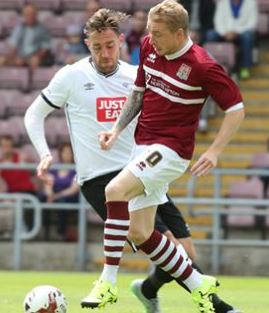 Despite a win in their second pre-season warm up game, new Rams boss Paul Clement is not happy with his men.

Clement stated he was not happy with this afternoons first half performances, and Derby County are not where he expected them to be at this time in pre-season.

Having watched a dismal first half Clement tore into his players at half time, this seemed to have an effect as Johnny Russell, a man who has been linked with a move to Cardiff City, scored his second in the pre-season games.

Derby rode their luck and Northampton should have levelled the scores as Richard Keogh brought down a Cobblers player for a penalty. This was duely  skyed over the bar, much to the relief of Keogh.

Players may have had their eyes on the up coming tour of Holland and not getting injured may have been inhibiting them. We will see as pre-season moves on to the Continent.