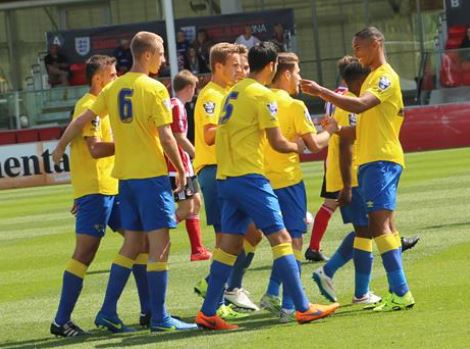 Shaquille McDonald broke the deadlock as early as the 2nd minute, Ivan Calero added a second with an exquisite 19th minute free-kick, and Offrande Zanzala completed the scoring in the 41st minute.

Head of the Academy, Darren Wassall, sent his youngsters out in a 4-4-2 diamond formation and the lack of width seen with the first team against Villarreal wasn’t an issue as they controlled the game from start to finish.

Timi Elsnik sat at the base of the diamond and had a very good game, seeing lots of the ball, and passing it around well. Alban Bunjaku was at the tip of the diamond and had some good attacking moments, including a strong penetrating run into the penalty area. Charles Vernam had a neat and tidy game on the right and Calero influenced play from the left.

McDonald and Zanzala led the line in lively fashion and both got themselves on the score sheet. McDonald, in particular, caused the Southampton defence problems with his strength and power. He had a second goal disallowed because of a foul in the build-up and could’ve scored a hat-trick on another day.

At the back, Derby County look short of players at this level. With Jamie Hanson and Isak Ssewankambo in and around the senior squad. Farrend Rawson on loan at Rotherham United, and the U18 squad away on their training camp in Holland, Alefe Santos was played out-of-position at right-back and Tom Koblenz played in an equally unfamiliar centre-back position. Alongside Koblenz, Nemanjic played on trial, and Max Lowe completed the back four at left-back.

The Rams defence hardly put a foot wrong and I was particularly impressed by the composure Koblenz showed. The trialist, Nemanjic, also had a good game – he tackled well, looked comfortable on the ball with either foot, but needed to be more physical when challenging for headers. Both Santos and Lowe looked at ease going forward and contributed when the Rams attacked.

Between the sticks Jonathan Mitchell had very little to do but, what he was asked to do, he did well. His concentration was good as he needed to be at his best to make a flying save late on.

The Rams capitalised early when McDonald intercepted a stray pass from the Saints’ goalkeeper and tucked the ball into the far corner of the net with supreme confidence.

With the game less than 20 minutes old, Calero doubled the lead with a superb free-kick that sailed over the wall and beat the goalkeeper. Southampton substituted their young goalie shortly after.

Zanzala was unlucky not to add a third when his fierce shot from the right struck the base of the near post.

Santos crossed the ball into the area, Zanzala battled the defenders in the air, the ball fell nicely to McDonald and he fired it into the back of the net, only to see the referee disallow the goal for a foul in the build-up.

Elsnik slotted a sublime defence splitting pass through to McDonald but he shot wide.

Vernam played a low cross into the penalty area, McDonald’s shot was blocked, Bunjaku latched onto the rebound, ran into the six yard box, only for his shot to be blocked as well.

By now Southampton had changed goalkeepers but the substitute didn’t fair any better. Four minutes before half-time he kicked the ball straight at McDonald. McDonald ran in, one-on-one with the goalkeeper, but instead of shooting, he unselfishly squared the ball for Zanzala to roll it into an empty net.

Zanzala sent a low ball into the danger area, McDonald’s shot was charged down, and Calero’s strike from the edge of the area struck the top of the bar and went over.

The final attempt of the first-half saw a tame shot from Vernam comfortably saved by the goalkeeper.

The Rams started the second-half brightly. Calero charged down the left, neatly set-up Zanzala, but he shot wide.

Substitute Mason Bennett and Lowe combined well down the left, Lowe pulled a pinpoint cross back from the byline, and trialist Guediri headed wide.

In the Rams goal Mitchell was largely a spectator. He’d made one comfortable save from a free-kick that took a deflection off the wall, but other than that the Saints hardly troubled him.

Mitchell had to be at his best right at the death though to preserve his clean sheet, throwing himself to his right to turn a long-range effort around the post for a corner.